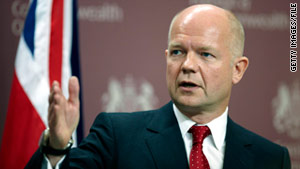 (CNN) -- Britain's top diplomat said his country should consider loosening ties with the European Union and distancing itself from the rest of Europe, according to an interview published Saturday by a British newspaper.

"We may get ahead as a result of being outside," Foreign Secretary William Hague, a longtime critic of the European Union, told The Times.

Hague disparaged the implementation of the euro currency in the interview, saying "It will stand as a monument in time to how groupthink can go so seriously away from what is realistic."

He said it was "always a giant mistake" to implement the common European currency without first aligning its member countries' tax and budgetary provisions.

The United Kingdom retained its own currency, the pound, opting out of Europe's shared currency, the euro, which is on shakier ground due to the debt crises of member countries.

A former head of Britain's Conservative Party, known for its skepticism of the European Union, Hague would also like to see other powers returned to Britain from the EU.

A Foreign Office spokesman told CNN that the information and quotes in The Times article are correct.