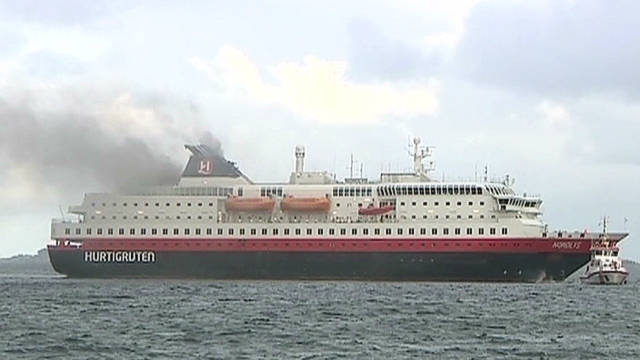 Nine people have been taken to the hospital, a spokeswoman for Sunnmore police district told CNN. There were 55 crew on board the ship, MS Nordlys.

All 207 passengers who were aboard the ship have been safely evacuated and taken to a hotel in the town of Alesund, operator Hurtigruten ASA said. They are of various nationalities.

Two of the crew members are seriously injured, Borghild Eldoen, a spokeswoman for the Joint Rescue Coordination Centers for southern Norway, told CNN. One has been taken to a specialist burns hospital in Bergen, Norway's second city.

She said police suspected an explosion had occurred in the engine room.

The fire is now under control but firefighters are battling to stabilize the multi-deck ship, which is taking on water, with the use of pumps, Eldoen said.

Everybody on board has now been accounted for and no one is believed missing, she added.

The cruise ship was operating on a popular tourist route from Bergen, to the small town of Kirkenes in the country's far northeast when the fire broke out, forcing the vessel to stop at Alesund, CNN affiliate TV2 reported.

The cause of the fire is under investigation.

Hurtigruten staff in Alesund are booking guests on to alternative vessels or making arrangements for them to travel home, the company said.