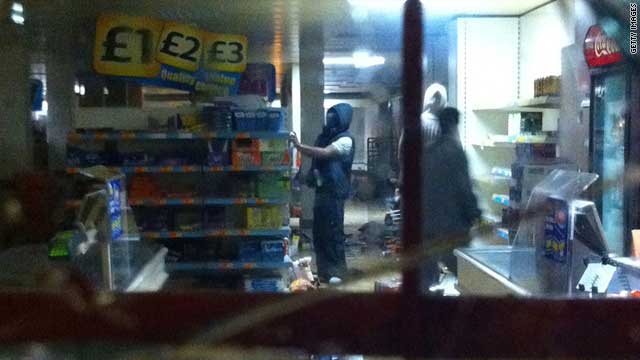 Youths try to set fire to shelves of goods inside a retail store in Tottenham, north London, on August 6, 2011.
STORY HIGHLIGHTS

(CNN) -- When Nana Clarke first heard about the protests in front of the Tottenham Metropolitan Police Service station, she walked down to join the crowd assembling several blocks from her home.

Like several hundred others that August 6th evening, Clarke was angry over the shooting death of Mark Duggan following a police stop earlier that week. Many in the Tottenham neighborhood, including Clarke, believe Scotland Yard was covering up his death.

"The police here do not care about us, our neighborhood, or our young people," Clarke says. "We are angry, still are angry, that a father was killed and we've gotten no answers."

And on the night of the Tottenham riots, that anger turned the crowd into a hostile mob, Clarke says. Soon there were clashes with the police, and fires were being set.

The police here do not care about us, our neighborhood, or our young people.
--Nana Clarke, Tottenham resident

"I felt I was too old," Clarke says. "I'm too old to really get involved, and if I needed to run, I couldn't run. But I could relate to why they did what they did. I didn't agree with burning people's homes, but I could relate. Someone had been killed, and there were no answers."

It wasn't just Clarke who watched it on TV. Local criminals saw the images and video of rioting and looting in Tottenham, and set out to capitalize on the fear of London residents and police disorganization.

After extensive interviews with Tottenham rioters, protestors, reviews of BlackBerry Messages, and cell phone videos from that night, it's clear that what started as a protest against police turned into an attempt by protestors to draw media attention to Tottenham. But that rapidly evolved into a semi-organized criminal enterprise resulting in wide spread riots across London.

Small time drug peddlers in Tottenham were directed by local crime bosses to smash storefront windows and grab money and merchandise, according to a 21 year old Tottenham man. We're calling him Whitney, a local cocaine dealer. Whitney says he directed the young men that sell drugs for him to loot over a three day period.

Whitney's account was independently verified by several corner drug dealers in Tottenham. As for Whitney, he says he left the country the day after the Tottenham riots so he couldn't be implicated by police.

Whitney also showed BlackBerry messages corroborating claims that local criminals and gangs would code their communications in an effort to mislead police informants.

Despite the efforts Whitney took to distance himself from his admitted criminal activity, he believes the police will eventually find him.

CNN contacted Scotland Yard multiple times for comment. Those calls were not returned.

"The whole place was trashed," Pilgrim says, pointing throughout her store. "It was really upsetting to see. They obviously run in, grabbed the clothes they could see, but it was pitch blackness, so they were guessing at what they were looking at. There was glass everywhere, blood, alcohol stains, footprints, handprints everywhere, snack wrappers, crisps and sweets where they obviously were eaten on the go."

The day after her shop was tossed, Pilgrim told CNN the rioters were "feral rats" that poured into her neighborhood with no regard for human life, property or society. Pilgrim says she was hurt and angry when she made the comment, which has been both praised and criticized in the public.

UK Justice Secretary Kenneth Clarke used similar language in a recent opinion piece in the Guardian newspaper. He wrote that a "feral" underclass is responsible for the rioting. Almost 75% of the offenders, Clarke noted, have been in and out of prison.

Punishment, he says, needs to get tough.

Acceptable to a "Certain Extent"

In Tottenham, there are houses that seem out of control, where adults drink and use drugs during the day while their children play with empty bottles and branches they found on the ground.

Whitney says there are few options for young people here other than crime; the school system is inadequate and social services are lacking. He says he turned to crime while he studied in high school to work in mechanics, and he often went without food.

Whitney also says he disagrees with the looters that burned people's homes and killed innocent people. He says the crimes should have been carried out up to "a certain extent," that killing is crossing the line. Yet, when he learned of the killings and the burnings, when he realized that crimes progressed passed that "certain extent," Whitney says he stayed silent to his crew even though he knew the riots were spiraling out of control.

"I didn't tell no-one to stop," Whitney explains. "You can't force someone to do something. I can only persuade someone to do something. I do play a major part in their minds, because I can control their minds by speaking to them. I can't stop them from doing things...I can't stop them from burning the buildings...but what I put to them was not burning buildings, but get what you need to get."

"We're not rats," Whitney says. "Rats don't think about what they do, and what they've done."