Prosecutors: Businessman got women for Berlusconi 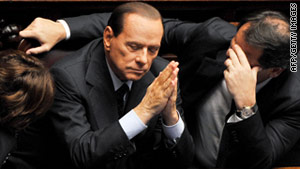 Rome, Italy (CNN) -- Prosecutors in Italy allege that a businessman supplied Prime Minister Silvio Berlusconi with about 30 women, or escorts, in order to win favor with him.

It's the latest development in a long-running sex scandal. Transcripts of some of 100,000 wiretap recordings made between September 2008 and 2009 were filed with a court in the southern city of Bari Friday, as prosecutors wrapped up a three-year prostitution investigation.

Tarantini selected women to be of "young age and slender" and instructed them in what to wear and how to behave at Berlusconi's parties, the prosecutors say.

Among them was Patrizia D'Addario, prosecutors say, who in 2009 alleged she and other women were paid to attend parties at Berlusconi's residence. He denied her claim.

In another conversation, they discuss what women they should each bring to a party that night. Berlusconi says that the male guests are powerful men "so the girls have the idea of being in front of men that can decide their destiny."

He says he has "two young girls whom I've not seen for a long time" -- one of them a journalist and the other a 21-year-old Brazilian "who cried over the phone telling me that I'd forgotten her."

Discussing a party the night before in a wiretap from October 10, Berlusconi tells Tarantini there were perhaps too many women. "At the most to have two each, but now I want you also to have yours, otherwise I feel in debt. Why don't you bring yours for you and I bring mine. ... "

Tarantini agrees, and Berlusconi continues: "Then we can exchange them ... "

In a conversation between Tarantini and one of the women he recruited, she said Berlusconi told her he would help her.

Berlusconi is not accused in this case filed in Bari but faces a separate trial in Milan for allegedly paying for sex with a then-17-year-old Moroccan belly dancer named Karima el Mahroug, nicknamed "Ruby the Heart-stealer."

El Mahroug has denied having sex with the premier. Both admit that he gave her money, although they say it was an act of kindness to help her. Berlusconi has always denied wrongdoing and also denies ever having paid for sex.

The latest revelations in the Bari case have reignited calls among his critics for Berlusconi to resign.

In a letter published Saturday to the Foglio newspaper, run by his former spokesman Giuliano Ferrara, Berlusconi wrote that he had no intention of quitting.

He said his behavior was nothing like what had been described in the media, and that he had done nothing to be ashamed of.

In a separate but linked investigation by prosecutors in Naples, Tarantini is accused of having blackmailed Berlusconi over the scandal.

According to the Naples prosecutors, Berlusconi was a victim of "veiled and implied threats" and paid 800,000 euros to Tarantini.

The prime minister denies having been blackmailed and says he gave the money to Tarantini as an act of charity.