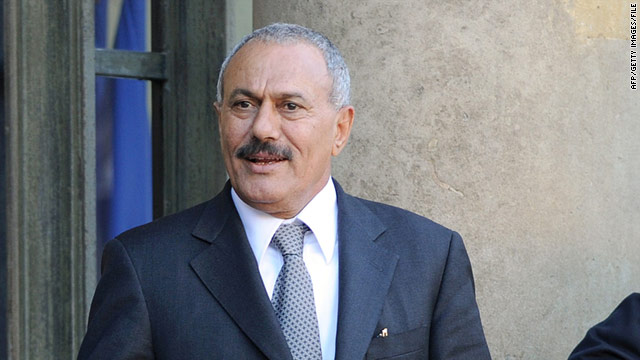 Yemen's president, Ali Abdullah Saleh, has been in office for 32 years and was last re-elected in 2006.
STORY HIGHLIGHTS
RELATED TOPICS

(CNN) -- Yemen's parliament on Saturday began debating proposed amendments to the country's constitution despite calls from the United States not to proceed with any planned action.

According to Yemen's official news agency, SABA, the parliament agreed in principle to continue discussing the proposed constitutional amendments and then referred the matter to a special committee.

The proposed amendments have caused much controversy since they were first proposed by Yemen's ruling party, the General People's Congress (GPC). The measures would increase parliamentary seats for women, reduce presidential terms in office and cancel presidential term limits, which are currently set at two consecutive terms.

The United States is concerned about continued instability in the country and wants opposition parties to be on board with the changes so that they will not boycott April's parliamentary elections. A separatist movement in the country's south and a delicate cease-fire in the north are still of concern to U.S. President Barack Obama's administration.

After Saturday's parliamentary procedure, Yemen's ruling party criticized the U.S. call for a delay on the vote, calling it interference in internal affairs and its sovereignty, SABA reported, attributing it to an unnamed source in the General People's Congress.

The ruling party has been in a dialogue with various political forces, the source told SABA.

Opposition party members protested outside the parliament Saturday while discussions were ongoing.

Local journalists present in parliament Saturday told CNN that 160 members of parliament agreed to form the subcommittee that will finalize the details of the proposed amendments within 60 days.

Many members of the opposition say they feel that long-promised reforms have not been delivered and that not enough time remains for appropriate action to be taken that would guarantee a fair poll. Many in Yemen worry the amendments will decrease the likelihood for reform even more and could allow Saleh to appoint himself president for life.

The United States on Friday urgently called on Yemen "to delay parliamentary action" and asked all parties involved to return to the negotiating table.

"The United States has seen reports regarding the apparent decision by Yemen's ruling General People's Conference to vote on a package of constitutional reforms at a parliamentary session on Saturday, January 1," acting U.S. State Department spokesman Mark Toner said in a statement. "Previously, we consistently welcomed and supported the commitments of both the government and the opposition to address issues related to constitutional reforms and other election reforms through the National Dialogue. We continue to believe that the interests of the Yemeni people will be best served through that process of negotiations."

Yemen's president, Ali Abdullah Saleh, has been in office for 32 years and was last re-elected in 2006.

According to Mohammed Albasha, spokesman for the Yemeni embassy in Washington, Saleh started a dialogue on the proposed amendments two years ago, but "coalition building efforts faced continuous hurdles and obstacles because of divisions amongst the opposition bloc. But there is still a window of opportunity to reach a reconciliation."

Albasha said Yemen's ruling party has made major concessions to the opposition.

"The president's call for the formation of a coalition government that will grant the opposition broader political representation before and after the upcoming parliamentary elections was flat out rejected," he said.

While Saleh has formed a panel in recent days to engage in dialogue with the opposition, the political discord has only increased. According to the Yemen Post, as of last Wednesday, the opposition had boycotted parliamentary sittings for a fifth consecutive day.

The parliamentary rift is causing concern among Yemen's allies, who feel additional political tension could further destabilize the country.

According to Toner's statement, the United States welcomes "reports that President Saleh has decided to appoint a new team from the ruling party to re-engage with the opposition in a new effort to reach a mutually agreeable conclusion. For that reason, we urgently call on all parties to delay parliamentary action and to return to the negotiating table to reach an agreement that will be welcomed by the Yemeni people as well as Yemen's friends."

Yemen has been locked in a struggle with al Qaeda in the Arabian Peninsula, or AQAP, the Yemen-based offshoot of the al Qaeda terror network. It grabbed the attention of the West with the attempted bombing of a Northwest Airlines trans-Atlantic flight as it landed in Detroit, Michigan, on Christmas Day in 2009.