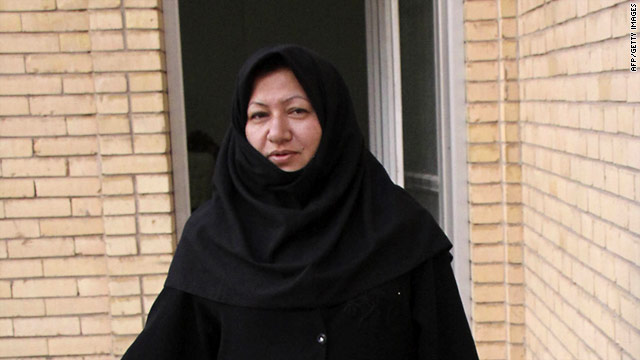 Sakineh Mohammadi Ashtiani has criticized her lawyers for politicizing her case.
STORY HIGHLIGHTS

(CNN) -- A woman convicted of murder and adultery and sentenced to die by stoning said Saturday she would sue the two German journalists who interviewed her son, Iran's government-backed Press TV reported.

The men, identified only as a reporter and photojournalist, were arrested in October after they interviewed the son and lawyer of Sakineh Mohammadi Ashtiani, who was convicted of adultery in 2006 and sentenced to death by stoning.

Her case has drawn sharp criticism from the international community. No date has been set for her execution.

Ashtiani told reporters in the northwestern city of Tabriz that she planned to sue the German nationals, Press TV reported. The men, who work for the Bild am Sonntag newspaper, are charged with espionage and are accused of working illegally as journalists in Iran.

Iran to carry out death by stoning?

What the Quran says about stoning
RELATED TOPICS

"This regime has a history of pressuring innocent people into confessing on television. This is just another example of their propaganda," she said.

Speaking outside the prison, Ashtiani criticized her lawyers for politicizing her case and denied she had been pressured to give interviews, Press TV said.

Ashtiani's son, Sajjad Qaderzadeh, was released from jail three weeks ago on humanitarian grounds, according to Press TV.

He had served more than a month in prison for granting the interview, Press TV reported.

Qaderzadeh appeared with his mother on Saturday and similarly said that he would sue the German nationals as well as his lawyers, who asked him to do the interview, Press TV said.

The son also added that he plans to take legal action against Issa Taheri, who Press TV said murdered Qaderzadeh's father in collaboration with Ashtiani.

"The woman who has been sentenced to death was allowed to leave her jail cell for a few hours to declare in front of western TV cameras that she would file a suit against our reporters," the editorial said.

It concludes, "Does Iran really think that a strange farce like this will improve the credibility of its justice system abroad?"

CNN's Mitra Mobasherat and Fred Pleitgen contributed to this report.