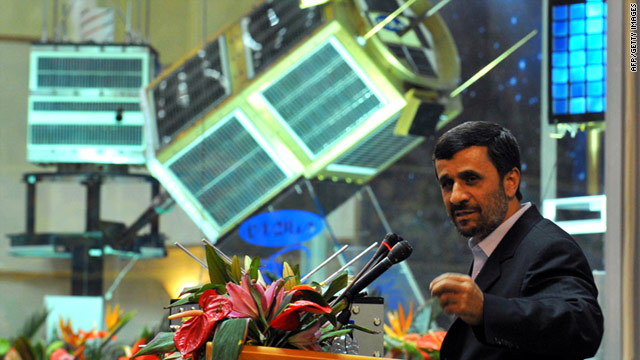 Mahmoud Ahmadinejad asserted that Iran plans to send astronauts into space by 2019, according to Fars.
STORY HIGHLIGHTS
RELATED TOPICS

Tehran, Iran (CNN) -- Iran is planning to launch a new satellite into orbit by the end of March, according to the country's semi-official Fars News Agency.

Wednesday's announcement for the planned launch of the Fajr -- or "Dawn" -- satellite follows a recent statement by Iranian President Mahmoud Ahmadinejad on strengthening the country's space-based presence.

The satellite "will be launched into space from an Iranian launch-pad and will have an Iranian exchange station and control station," Ahmadinejad said, according to Fars.

Ahmadinejad asserted that Iran now plans to send astronauts into space by 2019 as opposed an earlier announced timeline of 2024, Fars reported.