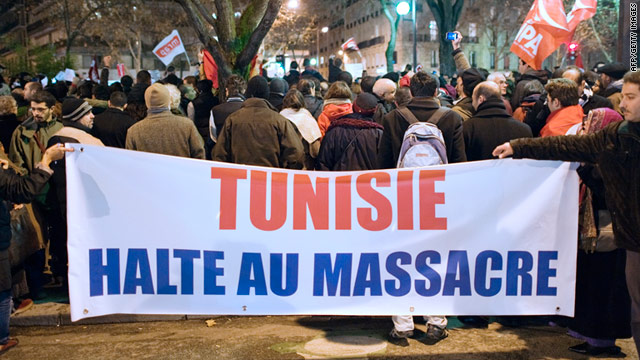 Tunis, Tunisia (CNN) -- The number of people killed during riots in Tunisia recently is about 21, the government said Wednesday, rejecting international media reports that the figure is higher.

Ahmad Freaa will be his replacement, Minister of Information Samir Abidi announced.

Prime Minister Mohamed Ghannouchi declined to answer a CNN question about whether live ammunition or snipers were used against demonstrators, saying those matters will be part of an investigation into the conduct of the security forces.

Everyone arrested in the past few days has been released other than those accused of looting and vandalism, he said.

Ghannouchi also announced that the government will begin providing a monthly grant and social security coverage to every unemployed person, providing they do nonprofit or volunteer work while looking for jobs.

Sources with the Union of Tunisian Workers said eight people were killed Wednesday in demonstrations in the towns of Dkash and Douz in the southern part of the country. The union says more than 50 people have died since the demonstrations erupted.

Lofti al Ahwal, a member of the union, said the organization is waiting for further action by the government before determining its next step. The union rejects government claims that members of al Qaeda have infiltrated the rioters, he said.

Al Ahwal said violence will be met with violence, and cautioned that shooting at demonstrators will escalate the situation. The union is unable to control the angry crowds, he acknowledged, and some of the actions and statements from enraged rioters do not comply with union policy.

In an interview with French radio, Tunisia's ambassador to France, Mahemed Raouf Najar, described the demonstrations as demands for employment, and a reflection of societal problems. Tunisia has a serious employment problem despite its efforts, he said, but it is a problem that many other countries face.

When asked about images of police violence, Najar said, "One thing I do know is that I have seen other images of terrible, terrible vandalism."

It is constitutional to protest in Tunisia, he said, but the actions of some went to far. The Tunisian president and government were not threatened by the riots, he said.

The U.N. High Commissioner for Human Rights, Navi Pillay, urged the Tunisian government in a statement "to ensure that its security forces cease using excessive force against demonstrators, and to launch transparent and credible investigations into the deaths."

While the situation escalated over the weekend, deaths were also previously reported in preceding weeks, the statement said.

"Whatever the precise total (of deaths), I am extremely concerned about the very high number of people killed in Tunisia in recent weeks," Pillay said. "It is essential that basic international human rights norms and guidelines governing the use of firearms are urgently and strictly adhered to."

Reports suggest that most protests have been peaceful and that security forces used excessive force, she said in the statement.

A leading human rights group, Amnesty International, condemned Friday what it called a violent crackdown by Tunisian authorities on the recent protests.

The wave of demonstrations was sparked by the suicide of an unemployed college graduate.

In December, Mohamed Bouazizi set himself on fire in front of a government building in the town of Sidi Bouzid after police confiscated his fruit cart, saying he was selling without a permit, according to Amnesty International. He died January 4 from his injuries.

The protests grew in size and sometimes turned violent.

Human rights groups said last week at least three others have died since the protests started -- two demonstrators shot by police and another man who electrocuted himself by touching a 30,000-megawatt pole and shouting, "No to misery! No to unemployment!"

Amnesty reported that 10 other protesters have been injured in confrontations with security forces and that lawyers have been singled out for beatings and arrest after a nationwide sit-in on December 31.

If there is evidence that members of the security forces have used excessive force or conducted extra-judicial killings, they should be arrested, tried and -- if convicted -- punished, Pillay said in the statement.

She also expressed concern about reports of widespread arrests, including those of human rights advocates and bloggers advocating human rights, as well as reports that those detained are being mistreated and tortured.

"While it is correct that people should be arrested if there is evidence they have committed crimes such as violence or arson, no one should be arrested or harassed for standing up for human rights," she said. "Human rights defenders and bloggers, arrested solely for their peaceful activities, must be released immediately."

Tunisian authorities have said they are acting in self-defense. Security forces fired on protesters in December, the state-run TAP news agency reported at the time.

Tunisia has been ruled for 23 years by Ben Ali, an ally of Western powers and a target of activist and human rights groups that claim he runs a corrupt police state that has infringed on citizens' rights.