By Barry Neild and Mohammed Tawfeeq 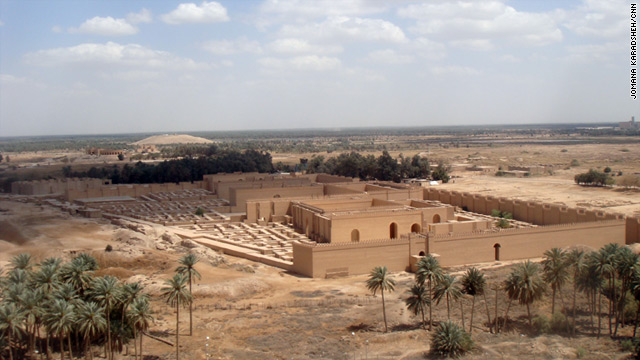 Nebuchadnezzar's Palace at Babylon. Iraq hopes the ancient site will help put it back on the tourist map.
STORY HIGHLIGHTS

(CNN) -- The words "tourism" and "Iraq" don't often get used in the same sentence these days, but if a new project to help preserve the historic ruins of Babylon pays off, archaeologists and officials say the country could soon be back on the international travel map.

So far, 2011 has been a good year for Babylon. Work funded by a $2 million U.S. State Department grant to restore two major structures has begun and one of two museums on the site damaged in the aftermath of the 2003 U.S.-led invasion is re-opening.

Home to several other ancient sites, including Ur -- the capital of the ancient civilization of Sumeria -- Iraq faces a race against time to protect its heritage against looters, environmental hazards and the ravages of modern life.

It is hoped the project at Babylon, whose legendary Hanging Gardens were one of the seven wonders of the ancient world, will help foster the skills needed to transform Iraq's other renowned archaeological sites into a major draw for academics and tourists.

"We're using (Babylon) as a lab for skill building," said Jeff Allen, a conservationist with the World Monuments Fund, which is working with Iraqi officials to try to secure United Nations World Heritage protection for the site.

As an archaeological site, you deal with the authentic remains and try to preserve its integrity. At the same time you're trying to offer opportunities for economic growth of the local area.
--Jeff Allen, World Monuments Fund
RELATED TOPICS

Although Babylon may not necessarily be top of a very long to-do list for archaeologists in the conflict-scarred country, starting there is crucial because of the site's global fame and its significance to Iraqis, Allan said.

"It holds a certain identity for them, so although I could say there are better archaeological sites in Iraq, probably none of them holds the symbolism for Iraqis that this site does," he said.

Such is Babylon's draw that even as security spiraled out of control in 2004, a handful of Christian American religious tourists were trying to gain access to the site, then occupied by U.S. and later Polish troops.

Originally known as Babel, Babylon is mentioned in both the Old and New Testaments in the Bible. The city was the site of the legendary Tower of Babel and features in several Biblical prophecies.

The Iraqi government says 165 tourists from 16 different countries entered Iraq to visit historic sites between 2009 and 2010. It says their willingness to visit despite ongoing risks of violence proves Iraq's potential.

"Considering the security situation that Iraq is passing through, this number of foreign visitors gives a very good indicator of how important tourism is in Iraq and how big the tourism industry will be in the near future," said Tourism and Antiquities Ministry spokesman Abdul Zahra al-Talaqani.

The U.S. Department of State warns that "numerous insurgent groups remain active throughout Iraq" and "recommends against all but essential travel within the country."

The British Foreign office echoes that advice, saying that throughout Iraq "the situation remains highly dangerous."

According to al-Talaqani, Babylon is expected to play such a key part in reviving the country's tourism fortunes that plans are in the works to create a new airport near the site.

If followed through, this development is likely to be emblematic of the delicate balancing act faced by those restoring Babylon: the need to protect it from the pressures of modern life while bowing to the demands of locals who will need to exploit it to earn a living.

"As an archaeological site, you deal with the authentic remains and try to preserve its integrity," said Allen. "At the same time you're trying to offer opportunities for economic growth of the local area."

Another tricky problem is the extensive reconstruction undertaken under Saddam Hussein. Many features were rebuilt -- poorly, experts agree -- including a massive palace, the removal of which would cost millions of dollars.

For now, work is focused on two structures, Babylon's Ishtar Gate and its Nabu sha Hare temple, where effects of the Saddam-era reconstruction are problematic but more surmountable.

Nevertheless, the problems are being exacerbated by rising levels of corrosive water, as agricultural waste water and waste from villages pushes the water table up through surrounding salt lands.

"The degradation is at an incredible, alarming rate," said Allen of the effect of the groundwater on these structures. "We're going to have to do more investigations and find out who did what, then remove the additions and see what we have."

For those trying to preserve Babylon, it would seem the work has only just begun.