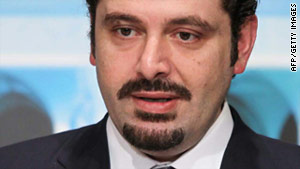 "We will cooperate with the president to the utmost degree to achieve forming a government that commits to national consensus needs and creates an opportunity for the country to let wisdom prevail over factors of pressure and tension," Hariri said in a televised news conference after meeting with President Michel Suleiman.

Suleiman asked Hariri to remain as head of a caretaker administration and requested that Cabinet members continue their duties until a new government can be formed.

He issued a decree scheduling parliamentary consultations early next week to name the next prime minister, who will then attempt to form the new government.

Back in Beirut after trips to the United States, France and Turkey, Hariri said the resignations of the 11 ministers were a democratic right at the core of Lebanon's constitution. But he said the collective move breached the spirit of a 2008 agreement that led to the unity government.

"Lebanon needs the efforts of all its people, but is first in need of the wisdom of its leadership and the awareness of decision makers to the fact that we all have no alternative to dialogue and that no one side can eliminate the other in Lebanon," Hariri said.

Hariri's government and Hezbollah had been at an impasse over the investigation by a U.N.-backed special tribunal of the 2005 assassination of Rafik Hariri, the premier's father. It is widely expected the tribunal will indict members of the Shiite Muslim Hezbollah, which is designated as a terrorist organization by the U.S. State Department.

Hezbollah had been pressuring Hariri's government to denounce the tribunal. The failure to reach a breakthrough has raised the specter of renewed sectarian bloodshed.

The United States and the United Nations both urged all political factions to exercise restraint.

"It is now more important than ever that all sides commit to constructive dialogue and avoid escalating tensions in the country," said U.S. Ambassador Maura Connelly.

Connelly said the United States will continue to work with Hariri "as head of Lebanon's caretaker government on all of the issues of vital importance in the U.S.-Lebanese bilateral relationship."

"The United States continues to support the Special Tribunal for Lebanon as the Lebanese people's best hope for putting its tragic and bloody history of political violence behind it," she said. "As the United States and the international community have said from the beginning, the STL is an irrevocable, international judicial process; its work is not a matter of politics but of law. The resignation of some of Lebanon's ministers will not change this."

U.N. Secretary-General Ban Ki-moon said at a Friday news conference that the world body's position remains the same: the tribunal is an independent, international judiciary system whose deliberations should never be interfered with.

The Lebanese constitution stipulates that the president must hold consultations with members of parliament -- individually or by parliamentary blocs -- to name the candidates for prime minister.

The candidate who gets the most votes or nominations is then named prime minister and asked to form a government.