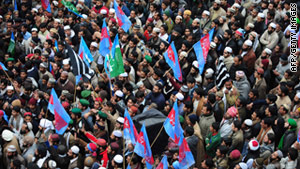 Rawalpindi, Pakistan (CNN) -- At a frenzied Friday rally in this garrison city outside of Islamabad, thousands warned Pope Benedict XVI to keep his nose out of the debate over Pakistan's blasphemy laws.

The demonstration came days after the Vatican called for Pakistan to repeal the controversial laws that say anyone who defiles the name of the Muslim prophet Mohammed should face the death penalty or life imprisonment.

"If you challenge the prophet, we will take revenge. It doesn't matter who does it," shouted a cleric on loudspeakers to thousands of cheering onlookers.

Since the shooting, hardline religious groups have held demonstrations praising suspected killer Muhammad Mumtaz Qadri -- who Pakistan's Interior Minister says confessed to the killing -- calling him a hero and a defender of Islam.

At Friday's rally, pictures of the the suspects's smiling face adorned scores of posters and a banner that covered the length of a truck. The banner also pictured a cleric who allegedly inspired Mumtaz Qadri to assassinate Taseer. The cleric is now wanted by police.

Taseer, who was sprayed with more than 20 bullets last week, according to a medical clinic spokesman, had led an aggressive campaign to change Pakistan's blasphemy laws after what he called the wrongful conviction of a Pakistani Christian woman.

The laws are often used to persecute minorities, Taseer had said.

At the rally, many said Taseer wanted to repeal the blasphemy laws, which they called an attack on Islam.

"No doubt he was an agent," said protester Noor Ul Mustafa. "After the pope's statement it's clear where he's getting orders from."

At the protest, Mumtaz Qadri's lawyer said his client should be set free because he was compelled to defend his faith.

For now, the suspected assassin remains behind bars.