Lebanon in flux as Hezbollah leader refuses to back prime minster 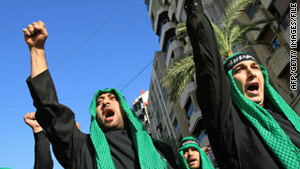 (CNN) -- Nearly three years after agreeing to a deal ending a tense -- at times violent -- stalemate, Hezbollah's leader on Sunday stood by his party's decision this week to withdraw from Lebanon's unity government and refused to back Prime Minister Saad Hariri's bid to stay in power.

That tribunal had been widely expected to indict members of the Shiite Muslim Hezbollah, which the U.S. State Department has designated as a terrorist organization.

Saying that the investigation "is run by the Americans and the Israelis," Nasrallah said that he believed that an accord on the issue -- in part brokered by Saudi and Syrian officials -- was in place. Saad Hariri, he said, went on a five-day trip last week to, among other locales, the United States to "seal the deal."

But Nasrallah said the Saudis suddenly withdrew support for an agreement that might have halted indictments. This fact, he said, prompted Wednesday's resignation from the cabinet of 11 ministers from Hezbollah and its allies that closed the book on Saad Hariri's consensus government.

On Sunday, Nasrallah said Hezbollah cannot accept any Lebanese government that couldn't successfully "postpone the ... indictment and to control the consequences, since we know it will be used to target us."

"We will not accept any government that will protect any false witness," he said. "We will not let anything affect our reputation and our dignity, or that anyone in this universe unjustly accuse us of killing Rafik Hariri."

The Hezbollah-allied ministers' resignations once again throws Lebanon into a state of political flux.

Afterward, Lebanese President Michel Suleiman formally asked Hariri to stay on -- as well as cabinet ministers who remained on board -- until a new government can be formed.

Lawmakers this week will hold talks to name Lebanon's next prime minister, per a decree issue by Suleiman. That person, which could be Hariri or someone else, would then be charged with trying to form a new unity government.

"We all have no alternative to dialogue and ... no one side can eliminate the other in Lebanon," Hariri said Friday.

Turkish Foreign Minister Ahmet Davutoglu said the parties would discuss the situation in Lebanon and Tunisia, where the ouster of long-time President Zine El Abidine Ben Ali has been followed by sporadic violence and unrest, according to the Anatolian news agency.

The underlying divisions in Lebanese culture and politics complicate the situation, given that Hariri and other pro-Western factions have long long been at odds with Hezbollah and its fiery leader.

In March 2008, Hariri -- then the parliamentary majority leader -- blamed Nasrallah for "starting a new round of horror" after gunbattles broke out in Beirut's Shia and Sunni neighborhoods following a speech by the Hezbollah leader.

But weeks later, Lebanon's Western-backed government and its Hezbollah-led opposition reached a deal aimed at ending an 18-month political crisis that pushed the country to the brink of civil war.

This coalition government continued, even after a June 2009 election in which the "March 14" coalition headed by Hariri won 71 seats in parliament -- 14 more than the Hezbollah-dominated "March 8" alliance.

Since his party's decision this week to leave the unity government, Nasrallah said that Hezbollah has been under intense pressure to reverse course and again back Hariri. But he said his opposition party had no intention of budging, whatever the outside influences.

"We believe in our national rights and responsibilities, and we will do what we believe," he said. "No one will scare us, not the statements and the empty threats."