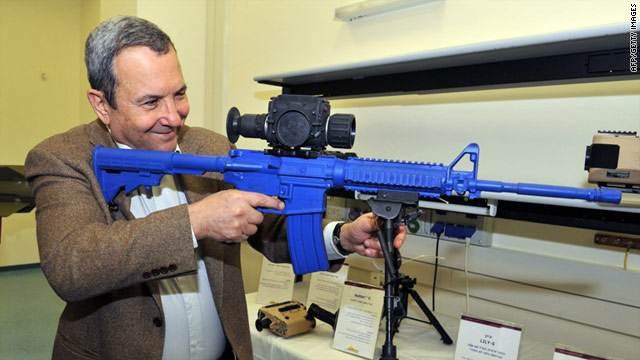 Barak made the announcement at a Knesset news conference Monday morning.

He told reporters that he and fellow Knesset members Matan Vilnai, Einat Wilf, Orit Noked and Shalom Simchon were leaving Labor to form a new new faction called Atzmaut (Independence) that he described as a "centrist Zionistic, and democratic party."

Barak, who has come under withering criticism from some Labor party members for staying in the right-wing coalition government of Prime Minister Benjamin Netanyahu, said the decision to bolt was due to the infighting within the party which he claimed was "drifting left."

One of the major complaints directed against Barak was his refusal to quit the coalition after peace-making efforts with the Palestinians broke down in September.

A letter explaining the decision signed by Barak and the four Knesset members took Labor to task, accusing it's members of disloyalty.

"For a long time many of the Labor faction members act as if they do not see themselves as members of the faction. They refuse to accept the authority of the chosen chairman and they speak and act against decision to be a part of the coalition," the letter read.

Eitan Cabel, a Labor Knesset member strongly attacked Barak's move in an Israel Radio interview Monday. "Those leaving have decided to destroy the Labor party, they need to come and ask our forgiveness for everything they have done and said against the party. The Labor party has finished the way as an alternative, the curtain has come down on the glorious Labor movement."

Another Labor and cabinet member, Isaac Herzog, quit his ministry position Monday and told reporters, "Today the Labor party got rid of a hump, Barak's masquerade party is over." Herzog had been minister of Welfare and Social Services.

He told the Israeli daily newspaper Haaretz, "Today is a day of positive change for the Labor Party. Barak's abandonment allows for a renewal of the party and its return to social action and true vision... I will pull together new and rejuvenated forces and turn [the party] into a true political alternative."

The Labor party headed by Barak held a total of 13 Knesset seats. With the announcement of a new faction, Barak and his four colleagues are expected to stay in Netanyahu's governing coalition.

Assuming all of the eight remaining Labor party members quit the coalition Netanyahu will be left with a coalition of 66 members down from the current 74.

Yossie Veter, a veteran political analyst for Haaretz told CNN that despite likely losing some coalition seats Netanyahu has come out the winner in the political drama.

"Although Netanyahu loses eight members of his coalition, he gains a loyal and stable coalition of 66 members who no longer hand out deadlines. There was a danger that the Labor party conference meeting in two months would take a decision to leave the coalition, leaving Netanyahu with an extreme right wing coalition. Now he has a stable coalition with a defence minister he likes to work with and who is still welcome in Europe and the U.S. and has no personal political aspirations."

He added that Barak also benefitted from the move winning himself more time as defence minister and the de facto foreign minister .

"Barak comes out of this as a winner as he took the initiative, he made the move, and this move leaves him in his position for as long as the coalition stands," said Veter.