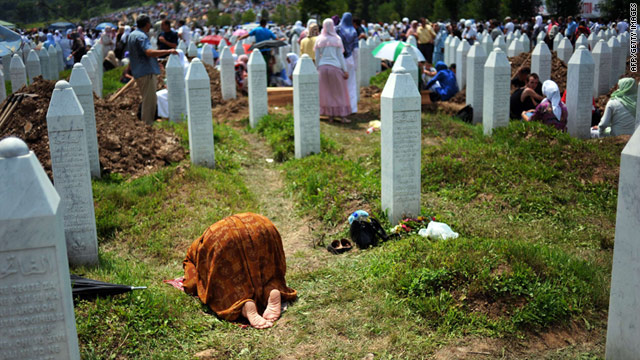 A woman prays during a mass burial for 775 newly identified victims of the 1995 Srebrenica massacre on July 11, 2010.
STORY HIGHLIGHTS
RELATED TOPICS

Jerusalem (CNN) -- Israeli police arrested Tuesday an immigrant from the former Yugoslavia who is suspected of participating in the 1995 massacre in the Bosnian town of Srebrenica.

Aleksander Cvetkovic immigrated to Israel with his wife, who is Jewish, and children in 2006 and received Israeli citizenship, said a statement from the Israeli Justice Ministry.

The Israeli state prosecutor's office received an extradition request for him last August from the Bosnian government. The decision to open an extradition process came after months of examining evidence.

That evidence exposes shocking details of the massacre of Muslims at Braniewo farm, the ministry said.

"Hundreds of Bosnian civilians were bused to the farm handcuffed and blindfolded. They were led to the killing fields where firing squads made up of Bosnian-Serb soldiers shot them in cold blood," the ministry said.

Cvetkovic actively participated in the massacre and was one of eight soldiers in the firing squad, the state prosecutor's office said. The extradition process, it said, is part of "an international legal action that investigates and prosecutes those responsible for planning and carrying out genocide."

About 8,000 Muslim men and boys were killed in Srebrenica in 1995. Radovan Karadzic, the Bosnian Serb president at the time, is accused of being responsible for the massacre.

Srebrenica became an emblem for the dissolution of Yugoslavia -- once a multi-ethnic state of Serbs, Croats, Muslims and others -- into six countries during bloody and brutal conflicts in the early 1990s.