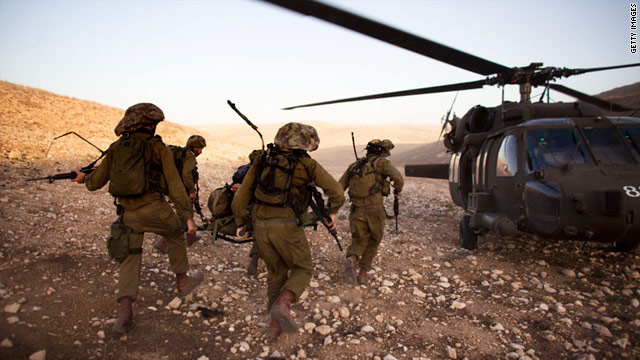 The IDF, pictured in a December training exercise, expressed regret for the death of a 66-year-old Palestinian in January.
STORY HIGHLIGHTS
RELATED TOPICS

Jerusalem (CNN) -- The Israel Defense Forces said Wednesday it has ended the military career of a soldier involved in a commando raid this month in the West Bank city of Hebron during which five Hamas members were arrested and a 66-year-old Palestinian man was "regrettably killed."

The investigation into the January 7 arrest operation, in which Amr Qawasme was killed, "concluded that the initial firing at Qawasme was done following a suspicious movement that caused the soldier to feel that his life was threatened," the IDF said in a statement. It found no fault with the initial shooting, saying it had been executed "in accordance with IDF rules of engagement."

But the actions of a second soldier, who watched the first soldier fire at Qawasme and fired, too, were unprofessional, and that soldier's military service has been terminated, the IDF statement said.

"The IDF deeply regrets the death of Amr Qawasme," it said.

The shooting prompted cries of outrage from Palestinians, and about 4,000 mourners attended Qawasme's funeral.

The IDF statement did not identify the man whose military career was terminated. Asked why not, a woman who answered the phone for the IDF said his name was withheld for privacy reasons. Pressed, she added, "It's not relevant to the announcement." She would not identify herself.