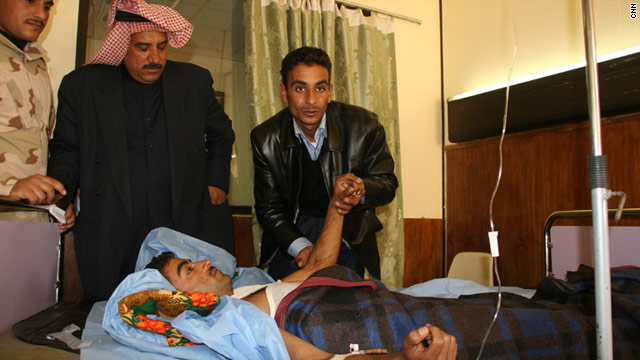 An injured man lies in a hospital in Tikrit, where a suicide bombing killed at least 65 people on Tuesday, January 18.
STORY HIGHLIGHTS

A suicide bomber drove a vehicle loaded with explosives into the headquarters compound of Force Protection Services in the heart of the provincial capital of Baquba during morning training, according to police officials in Baquba and Baghdad.

At least 13 people were killed and 70 wounded in that attack. Two of those killed were security guards, who were stationed at the first and main checkpoint before the attacker forced his vehicle forward.

South of Baquba, a suicide bomber wearing a vest packed with explosives detonated near a convoy carrying the deputy head of Diyala's provincial council, Sadiq al-Husseini, police said. The attack in al-Ghalbiya killed at least three people and wounded 26 others, including al-Husseini.

Al-Husseini's convoy was traveling with a procession of Shiite pilgrims who were making a four-day trek by foot to Karbala for Arbaeen, a religious observation that falls after 40 days of mourning for Imam Hussein, a grandson of the Prophet Mohammed who was felled in a 7th century battle in the Iraqi city.

The three killed in the blast were pilgrims, as were several of the wounded.

Thousands of Shiites are making their way to Karbala, and there is fear of more bloodshed ahead of next week's Arbaeen commemoration.

The bloody attacks came a day after a suicide bomber wearing an explosives-packed vest detonated at a police recruitment center in Salaheddin province, also in northern Iraq. That strike killed at least 65 people and wounded 160 others.

Five others -- all Shiite pilgrims -- were wounded Tuesday in a separate attack in Taji, just north of Baghdad.

Diyala was an al Qaeda stronghold until 2008, when Iraqi security forces, backed by U.S. troops, conducted major military operations in the province to push the militants out.

Awakening Councils also played a major role in hunting down al Qaeda fighters in the province. Awakening Councils, whose members are predominantly Sunni, have been recruited by the U.S. military to work against al Qaeda in Iraq and other militias.