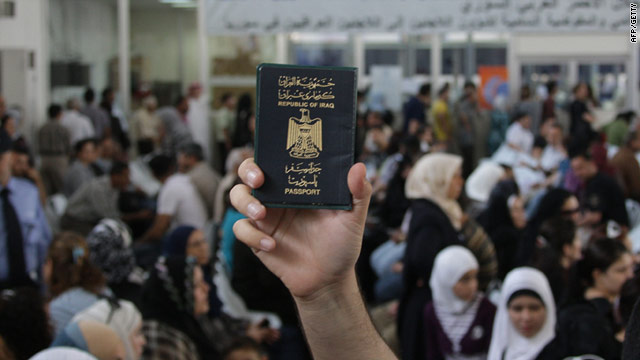 The UNHCR says many Iraqi asylum seekers deported from Europe try to flee the country again when they are sent home.
STORY HIGHLIGHTS

Baghdad (CNN) -- Despite appeals by the United Nations' refugee agency to European countries asking them not to deport Iraqi asylum-seekers, Sweden on Wednesday deported 26 Iraqi men, the agency said.

Officials with the U.N. High Commissioner for Refugees told CNN they met the deportees, who arrived at Baghdad's airport on Wednesday, and were able to speak with 19 of them.

Several of the men are from some of what UNHCR describes as Iraq's volatile provinces -- Baghdad, Diyala, Salaheddin, Nineveh and Kirkuk. The refugee agency has appealed to countries not to deport asylum-seekers from those areas.

The agency said of the 19 men officials spoke with, 14 were from Iraq's two most dangerous cities, Baghdad and Mosul.

Three of those from Baghdad are Christians, the UNHCR said Thursday.

"We understand that a number of those scheduled for return belong to religious and ethnic groups targeted by violence in Iraq," Fleming said Tuesday. "They, and others slated for return, appear to have profiles that would warrant protection under the 1951 Refugee Convention or the European Union's Qualification Directive."

However, UNHCR allowed, Sweden has the right under its law to refuse asylum through its legal procedure. The decision to deport the Christians, it said, may have been made prior to renewed attacks against Christians seen since October in Iraq.

Many of the Iraqi asylum-seekers in Europe are Kurds who flee for economic reasons, the UNHCR said, and those deported return to the relatively secure Kurdish region in northern Iraq.

However, many of those who are sent back try to flee again, the UNHCR said Thursday.

For example, the agency said last month a Christian man deported from Sweden fled there again after he narrowly escaped the bloody attack on the Baghdad church that left more than 50 Christians dead and began a renewed campaign of violence against Christians. Sweden agreed to readmit him when he returned, she said.

Although the level of violence has decreased significantly in the past few years, Iraq is still an extremely unpredictable and dangerous country. After a lull of more than two months in high-profile suicide attacks, for instance, five suicide bombings since Monday have left more than 80 people dead. Assassinations and smaller-scale bombings are an almost-daily occurrence.