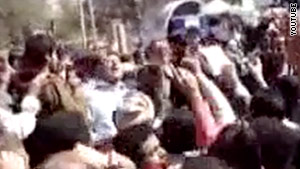 The protesters -- many of them students, journalists and lawyers -- demanded the release of Tawakkol Karman.
STORY HIGHLIGHTS

(CNN) -- Hundreds of protesters marched through Sana'a, Yemen, on Sunday demanding the release of prominent Yemeni human rights activist Tawakkol Karman, who was arrested on Saturday. According to a participant, security forces at one point clashed with protesters and at least 20 of Karman's supporters were later detained.

Karman, head of local rights group Women Journalists Without Chains, had been participating in and helping to organize protests calling for regime change in Yemen -- a growing movement inspired by Tunisia's "Jasmine Revolution."

In a statement on the country's official news agency, SABA, Yemen's Interior Ministry announced that Karman was arrested on Saturday on charges of organizing unlicensed rallies, illegal marches and incitement to commit acts of rioting and chaos -- acts that were "undermining the public social peace."

However, Karman's supporters suggested her detention was due mainly to her outspoken criticism of Yemen's government, and calls for its overthrow.

After one protest last week, Karman told CNN, "We called on the Yemeni people to wage a revolution against their corrupt leaders." She added, "We gathered to salute the Tunisian people."

Hakim Almasmari, editor in chief of the Yemen Post, was among the local journalists marching in support of Karman on Sunday. He told CNN hundreds of Karman's supporters participated -- most of them women, and among them students, journalists, lawyers, activists and parliamentarians. At one point, security forces began harassing protesters, he said.

"Some of the troops were caught on film beating protesters," said Almasmari, adding that security forces then confiscated cameras from some of the media outlets that had recorded some of these incidents.

What began on and around the campus of Sana'a University then moved onto the surrounding city streets. According to Almasmari, about 200 of the protesters then marched to the offices of Sana'a's prosecutor general demanding to know why Karman had been detained.

"The prosecutor general's office denied any knowledge of Tawakkol's imprisonment," said Almasmari, "or that the order to detain her had come from him or his office."

According to Almasmari, security forces then arrested at least 20 of the activists, among them Khaled Al-Anisi and Ali Al-Dailami, both with Yemeni Human Rights group HOOD.

Almasmari believes these detentions will only inspire more demonstrations.

"The protests will keep growing and growing because the activists in prison are well respected by society which, in return, will make them not stay quiet," Almasmari said.

Sunday's demonstrations were the latest in Yemen since the Tunisian people forced President Zine El Abidine Ben Ali to leave office and the country. On Saturday, hundreds of students and activists staged rival demonstrations at Sana'a University in Yemen's capital. The larger of the two groups demanded that Yemen's president, Ali Abdullah Saleh, step down, while the other group called for him to stay.

Several of the protesters' banners referred to the protests in Tunisia that started last month and ended 23 years of Ben Ali's rule.

The uprising in Tunisia, one of the Arab world's most secular countries, has ignited unrest elsewhere in the region, including Algeria and Egypt.

Another stated, "Blessings for the Jasmine Revolution -- it woke us up."

The other group of protesters in Sana'a, who support their country's president, carried posters that showed his picture.

Earlier this year, Yemen's parliament began debating proposed amendments to the country's constitution. The measures, which would cancel presidential term limits, have sparked concerns among the opposition that Saleh might try to appoint himself president for life. Saleh has been in office for 32 years and was last re-elected in 2006.

"Saleh right now is turning the regime into a dictatorship," said Almasmari, "which will force Yemen to end up as the next Tunisia."

In a sign of just how concerned Yemen's president may have become about the situation in his country and his grip on power, Saleh announced Sunday that security forces would be receiving a raise in salary and health insurance.

According to SABA, the announcement came during a speech Saleh delivered at the annual conference of the armed forces and security leaders.

In a reference to the protests currently ongoing, Saleh said, "Let us deliberate power peacefully and not by chaos. Yemen is not Tunisia."