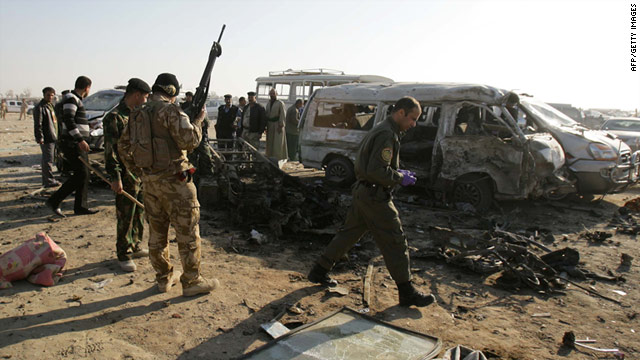 A suicide car bombing in the small town of Twareej, just outside Karbala, killed at least 20 people and wounded 35 others, Interior Ministry officials said.

Earlier, at least 13 people died when a car bomb exploded in a Karbala bus station crowded with Shiite pilgrims, who had traveled to the city for a religious observance, according to the Interior Ministry.

Another 45 people were wounded in the attack, which came near the peak of the Arbaeen, a religious observance that is one of the holiest days in the Shiite religious calendar.

Karbala is located about 100 kilometers (60 miles) south of Baghdad.

The dead and wounded included women and children, and were among the hundreds of thousands of Shiite pilgrims who have gathered in Karbala for the observance.

The Arbaeen is the culmination of 40 days of mourning for Imam Hussein, a grandson of Mohammed who died in a 7th century battle in Karbala.

The latest explosions come four days after multiple bombings that left 50 people dead and 150 wounded, most of them Shiite pilgrims.

Tikrit is about 160 kilometers (100 miles) north of Baghdad.