Protesters march in attempt to force Yemen's president out 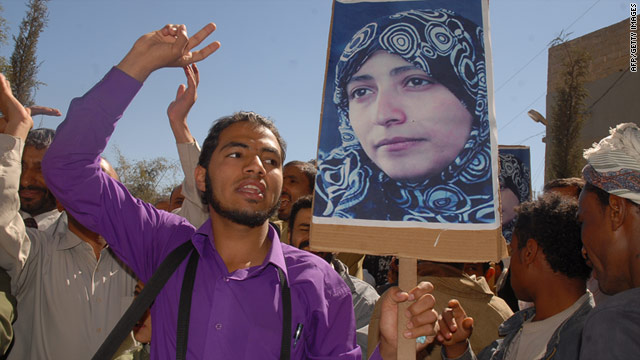 There were at least four demonstrations Thursday in the capital Sanaa, local journalists told CNN. Security was out in force, but there were no reports of violence.

A much smaller number of people turned out to demonstrate in favor of President Ali Abdullah Saleh, the sources said.

Egypt is also wracked by protests in the wake of the demonstrations that unexpectedly forced Tunisia's longtime President Zine El Abidine Ben Ali to leave the country.

The United States has sent top officials to Yemen and vowed support for the government's fight against al Qaeda in the Arabian Peninsula, as the local branch calls itself.

A Yemeni rights activist, whose arrest sparked an international outcry and domestic protests, was released from prison Monday and said there is a revolution taking place in her country.

Authorities arrested Tawakkol Karman over the weekend, accusing her of organizing anti-government protests in Sanaa. They let her go after more than 5,000 protesters gathered in her support.

She had initially refused to leave prison until officials also agreed to free other activists detained over the weekend, she said.

"This revolution going on in Yemen was inspired by Tunisia's 'Jasmine Revolution' and we are now having a 'Jasmine Revolution' in Yemen," Karman told CNN soon after her release. "The huge amount of pressure coming from the people here will force President Saleh to leave office."

Karman, who heads the Women Journalists Without Chains organization, said she was arrested Saturday night near her home.

People in Yemen are upset because the parliament is considering loosening the rules on presidential term limits. That has sparked concerns among the opposition that Saleh might try to appoint himself president for life.

Saleh has been in office for some 32 years and was last re-elected in 2006.