By Amy Hybels, For CNN 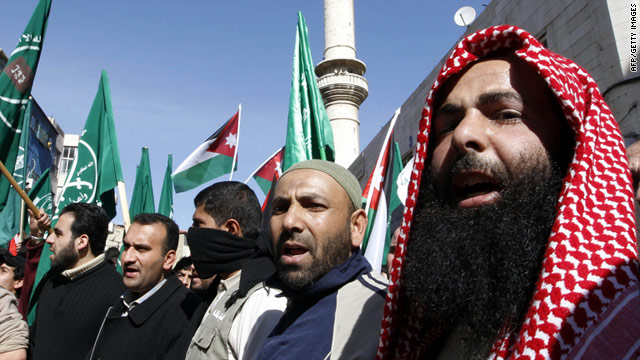 Thousands demonstrated in Amman and other cities Friday, pressing for political and economic reform.
STORY HIGHLIGHTS

About 3,000 people gathered in the Jordanian capital for the event, according to national police spokesman Lt. Col. Mohammad Al Khateeb. Half of those demonstrated, while the remainder walked alongside or watched from the sidelines.

Al Khateeb said there were protests in six other cities on Friday, with crowd estimates totaling about 2,200.

The demonstrations in Amman were the third in as many Fridays, with protesters gathering in front of the Al Husseini Mosque to decry government policies they blame for rising prices, low wages and unemployment.

There were also calls for Prime Minister Samir Rifai, who took office in December 2009, to step down, and for the dissolution of parliament.

The Islamic Action Front, the political arm of the Jordan branch of the Muslim Brotherhood, is also asking for an "elected government." Currently, the prime minister and cabinet are appointed by King Abdullah II.

Besides their demands of Jordan's government, those in Amman also showed solidarity with others in the Arab world who have recently taken to the streets to demand certain freedoms and urge the ouster of their governments.

Chanting, "Egyptian nation, our beloved -- your redemption is near," the Jordanian demonstrators spoke to the thousands of protesters in that north African country, who hit the streets Friday calling for an end to President Hosni Mubarak's 30-year-rule.