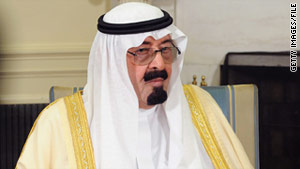 Abu Dhabi, United Arab Emirates (CNN) -- Saudi Arabia slammed protesters in Egypt on Saturday as "infiltrators" who seek to destabilize their country, while a a top Palestinian official affirmed "solidarity" with Egypt.

An official in Iran called on Egypt to "abide by the rightful demands of the nation" and avoid violent reactions.

And in Israel, a member of the Knesset, or parliament, described a recent conversation with Egyptian President Hosni Mubarak that suggested that Mubarak had been expecting -- and preparing for -- the wave of unrest that has engulfed Egypt, the most populous Arab nation.

Leaders across the Middle East were following events in Egypt with rapt attention Saturday, aided in that endeavor by saturation coverage on Arabic television networks such as Al-Jazeera. Many are on edge after protests in Algeria, Jordan and Yemen following unrest in Tunisia that forced that country's president from office after two decades in power.

In Saudi Arabia, the turmoil in Egypt rattled investors as the nation's stock market lost over 6% of its value Saturday.

That said, Saudi King Abdullah called Mubarak and "was reassured" about the situation in Egypt, the state-run Saudi Press Agency reported.

"During the call, the king said, 'Egypt is a country of Arabism and Islam. No Arab and Muslim human being can bear that some infiltrators, in the name of freedom of expression, have infiltrated into the brotherly people of Egypt, to destabilize its security and stability and they have been exploited to spew out their hatred in destruction, intimidation, burning, looting and inciting a malicious sedition,'" the news agency said.

Mubarak assured the Saudi king "that the situation is stable" and that the protests "are merely attempts of groups who do not want stability and security for the people of Egypt, but rather they seek to achieve strange and suspicious objectives."

Mubarak added that Egypt will "deter anyone who tries to exploit the freedom of (the) Egyptian people and will not allow anyone to lure those groups or use them to achieve suspicious and strange agendas," the news agency said.

Palestinian Authority President Mahmoud Abbas called Mubarak and "affirmed his solidarity with Egypt and his commitment to its security and stability," according to the official Palestinian news agency, Wafa.

"Iran expects Egyptian officials to listen to the voice of their Muslim people, respond to their rightful demands and refrain from exerting violence by security forces and police against an Islamic wave of awareness that has spread through the country in form of a popular movement," the state-run Press TV quoted Mehmanparast as saying.

The reactions did not come as a surprise. Iran's Shiite government has long been at odds with mostly Sunni Saudi Arabia for dominance in the region.

In Israel, where the Sabbath lasts through Saturday evening, there was no comment from top officials. But Benjamin Ben Eliezer, a Knesset member, told Israel's Channel 10 that he recently spoke with Mubarak, who told him that "this is not Beirut and not Tunis" and suggested that Egyptian authorities had prepared the army in advance.

Ben Eliezer is known to be the Israeli politician with the best personal relationship with Mubarak.

Some staff members at the Israel Embassy in Cairo plan to stay in Egypt, but some of their relatives and other Israeli citizens have flown back to Israel, an Israeli Foreign Ministry spokesman said.

On the streets of Abu Dhabi, CNN spoke with people to gauge their views of the Egyptian demonstrations.

"It's great that everyone is coming together," said Ayat el-Dwary, an Egyptian. "These are not just one group of people or one faction ... It's a revolution, absolutely."

"Tunis opened the door," el-Dwary said, in a reference to protests in Tunisia that ultimately overthrew a government. "But it was bound to happen -- it was inevitable. Change is coming to Egypt."

Samar Barakeh, who is Lebanese, said, "It's time for them to change their government and they have the right to say whatever they want."

Fellow Lebanese Antoinet Ghanem said, "It's about the whole regime structuring themselves to create more opportunities for these people to realize their ambitions and dreams ... It's about the people trying to express what they need."