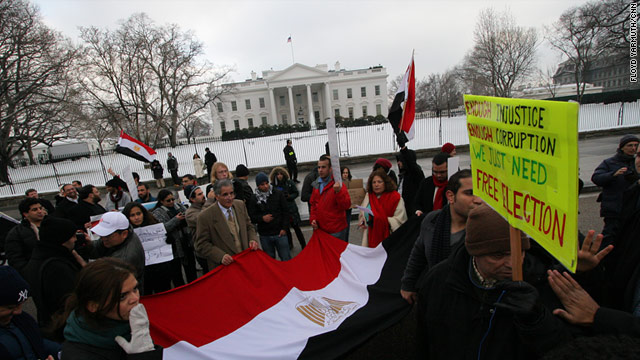 Demonstrators rally in front of the White House in support of protesters in Egypt.
STORY HIGHLIGHTS

(CNN) -- Several Western powers banded together Saturday in urging Egyptian President Hosni Mubarak to do all he can to prevent bloodshed and speedily fulfill his promises of reform.

The heads of England, France and Germany joined their counterpart in the United States on Saturday in calling on Egypt's leader to institute substantive policy changes in short order as well as new, open elections.

"It is essential that the further political, economic and social reforms President Mubarak has promised are implemented fully and quickly, and meet the aspirations of the Egyptian people," said a joint statement issued by British Prime Minister David Cameron, French President Nicolas Sarkozy and German Chancellor Angela Merkel.

"The Egyptian people have ... a longing for a just and better future," the statement continued. "We urge President Mubarak to embark on a process of transformation, which should be reflected in a board-based government and in free and fair elections."

Egypt protests in US

Acknowledging the "moderating role" played by Mubarak in the Middle East, the Western leaders urged him to "show the same moderation" in Egypt and allow people to demonstrate peacefully. They also called for "full respect for human rights and democratic freedoms, including freedom of expression and communication."

Meanwhile, Washington continued Saturday to keep up pressure on the Egyptian leader, on the same day he announced a new deputy, among other Cabinet changes.

U.S. State Department spokesman P.J. Crowley tweeted that the Egyptian government "can't reshuffle the deck and then stand pat." He added that Mubarak's "words pledging reform must be followed by action."

"With protesters still on the streets" in Egypt, he wrote, "we remain concerned about the potential for violence and again urge restraint on all sides."

The people of Egypt "no longer accept the status quo," Crowley added. "They are looking to their government for a meaningful process to foster real reform."

President Barack Obama had said Friday that he had spoken with Mubarak after the Egyptian president made a televised speech. Mubarak, in his address, said he understands "these legitimate demands of the people and I truly understand the depth of their worries and burdens, and I will not part from them ever and I will work for them every day."

Obama said he told Mubarak "he has a responsibility to give meaning to those words, to take concrete steps and actions that deliver on that promise."

"Violence will not address the grievances of the Egyptian people," Obama said in a televised appearance Friday. "Suppressing ideas never succeeds in making them go away."

Obama himself convened a similar meeting on the situation in the early afternoon.

In an interview conducted Friday morning in Davos, Switzerland, British Prime Minister Cameron told CNN's Fareed Zakaria that "reform and progress in the greater strengthening of democracy and civil rights" is needed in Egypt. The interview will air at 10 a.m. and 1 p.m. Sunday on the "Fareed Zakaria GPS" program on CNN.

Cameron said "just the act of holding an election isn't enough," urging a "more mature and thoughtful approach" to build a stronger democracy.

He made a point that he didn't think the overthrow of Mubarak -- whom he called "a friend of Britain" -- was necessary.

"What we support is evolution, reform, not revolution," the prime minister said.

"We'd all be better off if there were more countries with more democratic institutions," he added. "But let's recognize those institutions need to be built from the bottom up, not always sort of dropped in from the top down."