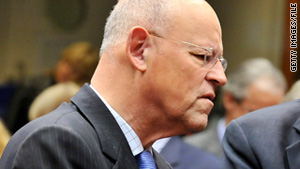 Tehran, Iran (CNN) -- The Netherlands froze all ties with Iran Sunday after Tehran hanged a Dutch-Iranian woman a day earlier, calling the execution a "shocking act by a barbaric regime."

And Dutch Foreign Minister Uri Rosenthal will "discuss possible measures" against Iran by the European Union on Monday, the foreign ministry said.

Iran hanged Zahra Bahrami Saturday, saying she was a drug smuggler, the semi-official Fars news agency reported, although the Dutch government expressed "great concern" about her case three weeks ago.

Fars said Bahrami smuggled cocaine into Iran with the help of a Dutch partner.

But the International Campaign for Human Rights in Iran suggested the drug charges were only a pretext to execute her.

The campaign said Bahrami was originally charged with security offenses in the wake of widespread protests against the government over a controversial presidential election in June 2009.

Her lawyer was "shocked" to find she had been hanged, the group said.

"I was absolutely not informed about this. They should have informed her lawyer of the execution, but I had no idea. I don't know what to say. Just that I am shocked," Jinoos Sharif Razi told the group.

The campaign said it learned of the hanging from Bahrami's daughter.

Bahrami was accused of bringing cocaine into the country twice and selling it. Cocaine and opium were found during a search of her house, Fars reported.

Her sentence also included 70 lashes and a $1,400 fine, Fars reported.

Fars added that during a search of her house, while she was charged with security crimes, 450 grams of cocaine and 420 grams of opium were discovered and, following further investigation, it was found that she had also distributed 150 grams of cocaine.

Iran denied Bahrami access to Dutch consular assistance and would not let Dutch officials attend her trial because Tehran did not recognize her dual citizenship, the Ministry of Foreign Affairs in the Netherlands said on January 5.

'I'm greatly concerned about Zahra Bahrami's situation, and I immediately asked the Iranian authorities to clarify the very disturbing reports that she had been condemned to death," Foreign Minister Rosenthal said in a statement at the time.

It is not clear if Iran ever responded to the Dutch request.

On Sunday, the Netherlands strongly advised Dutch-Iranian citizens not to travel to Iran.