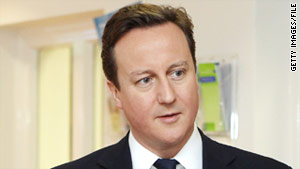 "These are despicable scenes that we're seeing, and they should not be repeated," British PM David Cameron said.
STORY HIGHLIGHTS

(CNN) -- Leaders around the globe joined a chorus of condemnation Wednesday over the eruption of violence in Cairo as embattled Egyptian President Hosni Mubarak struggled to maintain his grip on power.

Violence between pro- and anti-government demonstrators spread through the Egyptian capital despite Mubarak's announcement that he will not seek re-election in the presidential election this year.

The time for a political transition in Egypt "is now," U.S. presidential spokesman Robert Gibbs said. The Egyptian people "need to see change," and a "meaningful transition must include opposition voices and parties being involved in this process as we move toward free and fair elections."

U.S. State Department spokesman P.J. Crowley denounced the attacks, calling them "a direct threat to the aspirations of the Egyptian people."

"The use of violence to intimidate the Egyptian people must stop. We strongly call for restraint," he said.

British Prime Minister David Cameron warned that "if it turns out that the (Mubarak) regime in any way has been sponsoring or tolerating this violence, that would be completely and utterly unacceptable."

"These are despicable scenes that we're seeing, and they should not be repeated," Cameron said outside 10 Downing Street. "They underline the need for political reform and, frankly, for that political reform to be accelerated and to happen quickly."

German Foreign Minister Guido Westerwelle called on Egyptian security forces "not to use force against the demonstrators."

"Any escalation of the situation must be avoided at all costs, (and) gangs of thugs must be curbed immediately," he said. "The scenes of violence on the streets of Cairo throws into question whether the Egyptian political leadership has understood the importance of a speedy democratic reconstruction."

French President Nicolas Sarkozy said his country "renews its support for the Egyptians' aspiration for a free, democratic and diverse society."

"France will be alongside all those who intend to demonstrate peacefully," he declared.

Israeli Prime Minister Benjamin Netanyahu expressed concern over the makeup of the regime that will follow Mubarak, who has helped enforce a more than three-decade peace between Egypt and Israel.

"I am convinced that that the forces that want to bring change and democratization in Egypt will also enhance peace between Israel and the Arab world," Netanyahu told the Knesset. "But we are not there yet. The struggle has not been decided. ... We need to do everything to make sure that peace endures."

United Nations General Secretary Ban Ki-Moon called the violence in Cairo "unacceptable" and said it is important for an "orderly and a peaceful transition" to take place.

"We should not underestimate the danger of instability across the Middle East," he added.

Turkish Premier Recep Tayyip Erdogan asserted that Mubarak's administration "is not inspiring confidence for a quick transition to democracy," the Anatolia News Agency reported. "This is the people's expectation. ... A roadmap and a calendar for this should be announced, (and) I believe that such a transition should be made under an interim administration."

How much impact are the calls for change having on Mubarak? Probably not much, according to one veteran Middle East analyst.

Robert Danin, a senior fellow at the Council on Foreign Relations, noted that the apparent crackdown on anti-government protesters started the day after former U.S. Ambassador to Egypt Frank Wisner told Mubarak he should not seek another term as president.

Wisner was reportedly conveying that message from Obama.

"The timing is interesting," Danin said. "That suggests Mubarak has basically said, 'Enough. I've laid down my timeline, and now I'm digging in.' "

Danin called the eruption of violence "a clear rebuff" of the push for more immediate reform being advanced by the American and other governments.

Danin called Mubarak a man who generally "keeps his own counsel." The Egyptian leader does have a close relationship with Saudi King Abdullah, but Riyadh has generally been expressing support for Mubarak, Danin noted.