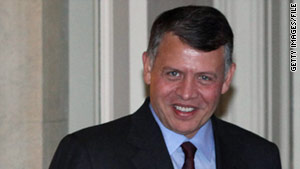 Amman, Jordan (CNN) -- Opposition groups in Jordan are upset with King Abdullah II's choice for a new prime minister, saying the decision should have been made in a different way.

Jameel Abu Baker, spokesman for the Muslim Brotherhood, said the appointment of Marouf Al Bakhit was a surprise.

"The change we demanded should have been done through the formation of a national unity government headed by an agreed-upon personality, and then holding early elections, and setting a new law for democratic elections," he said.

In appointing Al Bakhit on Tuesday, Abdullah instructed the new government to take "practical, swift and tangible steps to launch a real political reform process." He said a new election law would be the "main pillar of political development."

Opposition parties -- especially the Islamic Action Front -- are demanding that parliament, not the king, choose the government. But it has always been the prerogative of Jordan's king to dismiss and appoint governments.

Baker said Al Bakhit's previous term as prime minister had seen election fraud, and the Muslim Brotherhood had not been allowed to take part in political life.

Zaki Bani Ershaid, an influential figure in the Islamic movement in Jordan, said Al Bakhit was "not a man of reforms, and so he should stop all plans to form the new government."

Another opposition figure, Saeed Thiab of the Union party, said experience with Al Bakhit was not positive, but the party would wait to see what reforms were proposed.

Street protests across Jordan in recent weeks have focused on demands for a more open political process, as well as economic grievances. Fuel and food prices in Jordan have risen sharply in recent months, reflecting higher world prices for wheat and oil.

The protests have stopped short of criticizing the king -- but are widely thought to have influenced the timing of Tuesday's announcement. King Abdullah acknowledged the reform process "has suffered from many shortcomings" and young Jordanians were frustrated by lack of opportunity.