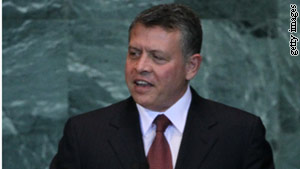 Amman, Jordan (CNN) -- Islamist leaders say they will go ahead with protests Friday here in the capital despite a meeting with King Abdullah II.

The Islamic Action Front, the political wing of the Muslim Brotherhood, and other groups plan to march to the prime minister's office and stage a sit-in to protest the appointment of a new prime minister by the king earlier this week.

A statement from the Palace after the king's meeting Thursday with leaders of the Muslim Brotherhood acknowledged the need for "inclusive reforms" -- and said such reforms had been delayed because some people had chosen private interests over the public.

The Front is demanding reform of the country's election law to make parliament more representative of popular opinion. It also wants the prime minister to be elected by parliament, instead of being chosen by the king as has long been the practice in Jordan.

King Abdullah promised the Islamist leaders that the new government would begin a national dialogue on reforming the election law. The Front has opposed the appointment of new Prime Minister Marouf al Bakhit -- and refused an offer to be included in the new government.

IAF's Secretary-General Hamza Mansour told CNN in an interview Thursday that changing prime ministers was not the solution Jordanians needed. "We want change in the way governments are formed along with quick reforms in general policies and laws," he said.

Mansour said he hoped Jordan would not see a repeat of events in Egypt because its circumstances were different. But, he added, the country is in the midst of an economic and political crisis that needed addressing urgently.

"We do not have real political freedoms, and laws are not good," he said. "The economic situation is very difficult here, debts are huge, and so is the budget deficit... The social conditions are difficult and when political and economical conditions worsen, social violence surfaces."

Analysts here see the appointment of Bakhit as prime minister as an attempt by the king to shore up support among Jordan's tribes, the bedrock of loyalty to the monarchy.

Officials close to the Palace told CNN that the king was trying to turn a regional upheaval into an opportunity for reform in the face of resistance.

Bakhit is a former intelligence chief who had a previous stint as prime minister, ending in 2007. He has said the process of forming a government could last several days.

Jordan's economy has been hard hit by the global economic downturn and fast-rising commodity prices. Youth unemployment is high -- in a country where 70% of the population is under 30 years of age.

After two years of trying to cut the budget deficit by reducing subsidies, the previous government reversed course in January as protests in Tunisia shook the Arab world. Several subsidies were restored and pay for civil servants improved, at a cost of several hundred million dollars. But the kingdom is heavily reliant on international economic aid to meet its bills.