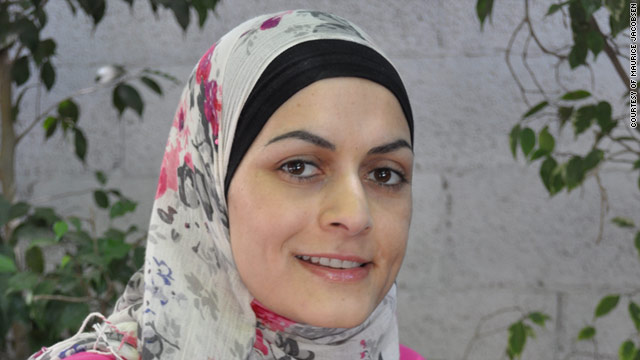 Laila El-Haddad, author of Gaza Mom, has been blogging since 2004.
STORY HIGHLIGHTS

(CNN) -- In Gaza, bloggers say they are using the internet to share the realities of their daily lives with the wider world.

Mona El-Farra, a 56-year-old doctor and human rights activist, began writing her blog From Gaza, with Love in 2006.

She said she started distributing her diary by email after her parents' home was demolished by the Israeli army in 2000, and later the diary became a blog.

El-Farra said her parents' home was demolished without warning for what the army described to her as "security reasons."

I feel I'm not alone, but in contact with the whole world through my blog.
--Mona Al-Farra, Gazan blogger

El-Farra said: "I feel better when I write. I feel I'm not alone, but in contact with the whole world through my blog.

"I want to create a bridge between the people I work with -- women, children, patients -- and the outside world.

"There's been a lot of violence to write about in the last five years: shootings and killings under occupation."

Israel officially disengaged from Gaza in 2005, but many Palestinians still regard Gaza as "occupied."

Gaza has been subjected to an Israeli and Egyptian economic blockade (which Cairo officially denies) since 2007. Although some restrictions were lifted last year it remains difficult for Gazans to travel.

"Blogging is my most important link with the outside world, and through the blog I have made many more links," El-Farra added.

As well as giving Gazans a chance to connect with the rest of the world, their blogs give those outside the region an inside view of Gaza.

El-Farra said her blog has thousands of readers from all over the world.

Laila El-Haddad, who lives in the United States but travels back to Gaza to visit her parents as often as she can, was among the first to begin blogging during a visit in 2004.

She said: "My blog opened up a window at a time when there were few windows to understanding what life was like in Gaza."

El-Haddad has long tried to encourage others in Gaza to write blogs, and said in the last few months there had been an explosion of interest in both social media and blogging.

She said: "This summer it finally started to stick. I met several young bloggers who had recently started. Just in the last few months, both social media and blogging have really taken off in Gaza."

El-Haddad said she understands from her own experiences the problems facing aspiring bloggers in Gaza.

"I know how difficult it is just to survive under an occupation," she said. "It takes a lot more to have the energy to write about what you are going through. It's not something that everyone can do.

"Being in Gaza can be suffocating and it's a challenge to be able to verbalize what you are living through."

Despite these barriers, there are many who are willing to write about their experiences.

People don't want to hear the same things that are on the news, they want to hear something more personal.
--Sharif Al Sharif, Gazan blogger
RELATED TOPICS

He said: "I started writing about the Palestinian cause for an international audience, but then I realized people don't want to hear the same things that are on the news, they want to hear something more personal.

Al Sharif said the number of bloggers, as well as those using social media, had multiplied in Gaza in the past year.

"Palestinians want to share their thoughts," he said. "Not every aspect of life can be shared in public, so sometimes people need to vent anonymously."

El-Haddad, 33, has recently written a book, "Gaza Mom: Palestine, Politics, Parenting and Everything In Between," based on her blog.

El-Haddad began her blog during a visit to Gaza with her baby son as a way of keeping in touch with her husband in the United States, himself a Palestinian refugee.

However, when she became stuck in Egypt for six weeks with her nine-month-old son because the border with Gaza was closed, she realized how the blog could help people in the wider world understand life for Palestinians.

"At that time I saw the political merge with the personal, and the political is very personal for Palestinians," El-Haddad said. "I was able in a small way to highlight the plight of so many other Palestinians trying to get back to Gaza."

Not everyone supports the bloggers. El-Farra said she often receives hostile comments on her blog from people who don't approve of her writing about peace, but she refuses to be intimidated.

For El-Haddad, the fact that she writes about her young children -- aged seven and three -- often attracts criticism.

She said: "I get a lot of critical comments that I'm putting my children in harm's way, but my first instinct is that they're just an attempt to silence that Palestinian narrative. I know that I always have the best interests of my family at heart."