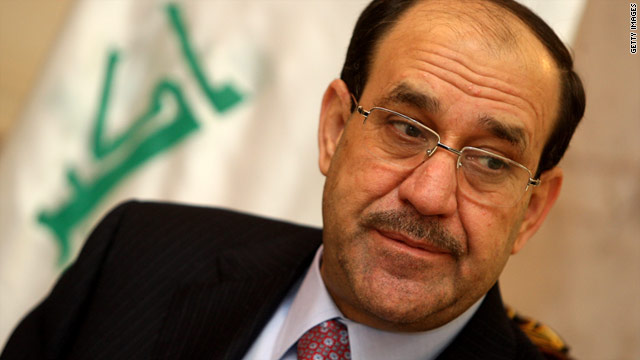 Nuri al-Maliki will not seek a third term as Iraq's prime minister, according to state-run media.
STORY HIGHLIGHTS

Baghdad (CNN) -- Iraq's Prime Minister Nuri al-Maliki will not run for a third term when his current one expires in 2014, the nation's state television reported Sunday.

Al-Maliki is also working to pass legislation that limits his successors to a maximum of two four-year terms in office, a senior parliamentary advisor told CNN.

"If al-Maliki passes this constitutional amendment then that means he definitely won't be a prime minister for a third term," said Ali Hadi al-Moussawi, an adviser to the prime minister.

Iraq's constitution restricts the country's president from seeking a third term but does not set term limits for the prime minister or members of parliament.

The news comes two days after al-Maliki said he would cut his salary in half amid growing unrest over poor public services and water shortages.

Protesters around Iraq have said popular uprisings in both Egypt and Tunisia inspired their weeklong demonstrations for improvements in government services and their quality of life.

Thousands have rallied across the country in the past week, railing against rampant poverty, a 45% national unemployment rate and shortages of food, electricity and water, including several hundred in three different parts of Baghdad on Friday.

Al-Maliki said those concerns prompted his decision to axe his salary, which he said would "help reduce the differences in the living standards for different classes."

"Fifty percent of my monthly salary as prime minister will be reduced and returned to the government's treasury starting from the current month, as a contribution from me to reduce the difference in the salaries of the state officials," al-Maliki said in a statement on his official website.

The new plan would create projected deficits of up to 16 percent, he said.

The budget is based on an average oil price of $76.5 per barrel and projected exports of 2.2 million barrels of oil per day, including 100,000 daily barrel exports from Iraq's autonomous Kurdish region.