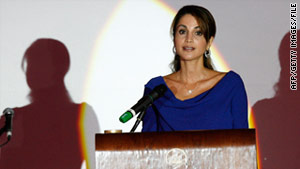 Thirty six members of Jordan's major tribes have attacked what they called the interference of Queen Rania.
STORY HIGHLIGHTS

Amman, Jordan (CNN) -- In unprecedented criticism of Jordan's royal family, three dozen prominent Jordanian tribal figures issued an urgent call for reform Sunday and warned that the country may follow Tunisia and Egypt into turmoil without it.

The statement from 36 members of the country's major tribes attacked what they called the interference of Queen Rania in running the country. The queen, "her sycophants and the power centers that surround her" are dividing Jordanians and "stealing from the country and the people," the letter states.

The tribal figures said they were sending a clear message to King Abdullah II. They warned that if corruption was not prosecuted and reform was not implemented, "similar events to those in Tunisia and Egypt and other Arab countries will occur." The internet and satellite television had overcome the ability of regimes to stifle the thirst for information, the statement said.

There has been no response from the royal palace to the statement, which was posted on a popular Jordanian website. But the website, ammonnews.net, later complained that it had been the target of "intentional hacking" and that the statement had been removed.

Jordan's tribes make up about 40% of the country's population and are seen as the bedrock of support for the Hashemite monarchy that has ruled the country for nearly a century.

Though it was not clear whether all the signers were speaking for their tribes, such criticism of the monarchy is rare in Jordan -- recent street protests that criticized the government stopped short of calling for King Abdullah II to step down.

Abdullah marks twelve years on the throne this month, but faces growing criticism among Jordanians amid a recession and allegations of widespread corruption among officials. He dismissed his Cabinet last week, acknowledging that corruption needed to be tackled and political reforms urgently pursued.

Rania, 40, has been married to Abdullah for 17 years. She has had a high profile at home and internationally and has been involved in a number of charitable causes, including youth unemployment.

The tribal leaders said Sunday that allegations of corruption by Layla Trabelsi -- the wife of longtime Tunisian strongman Zine El Abedine Ben Ali, who was forced into exile by a popular revolt in January -- and by Egyptian first lady Suzanne Mubarak have been "the catalyst of populist movements" in those countries. What has happened in Jordan is even worse, the statement said.

"We refuse the squandering of public money and aid to polish her own personal image at the expense of the nation," the statement said. The signatories demanded a breakdown of how aid money from the United States and European Union was being spent and called for a new election law and greater media freedom.

Resentment of Rania, who is Palestinian, is not new among Jordan's Bedouin tribes, but has risen sharply. In recent days, tribal sources have expressed to CNN their resentment about what they perceive as her lavish lifestyle and her interference in politics.