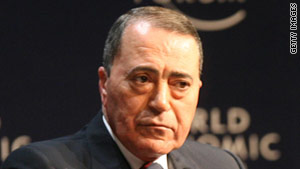 Amman, Jordan (CNN) -- Jordan's King Abdullah II swore in a new government Wednesday with a mandate for political reform, a former general at its head and several opposition and media figures among its ranks.

Abdullah shook up his Cabinet last week amid protests at home. While the king gave new prime minister Marouf al Bakhit orders to implement "genuine political reform," Bakhit's appointment was seen as an attempt to shore up support among Jordan's Bedouin tribes -- the bedrock of the monarchy.

Bakhit is a former national security official who served a previous stint as prime minister, ending in 2007. His Cabinet includes members of several Jordanian political parties, opposition groups, the editor of a newspaper that is sometimes critical of the government and one person considered an independent Islamist.

Jordan's economy has been hit hard by the global economic downturn and fast-rising commodity prices. As in nearby Egypt, where longtime strongman Hosni Mubarak faces the toughest challenge to his nearly 30-year rule, youth unemployment is high. Officials close to the palace told CNN last week that Abdullah is trying to turn a regional upheaval into an opportunity for reform.

Bakhit will serve as defense minister as well as prime minister in the new government, while Foreign Minister Nasser Judeh and Finance Minister Mohammad Abu Hammour kept their portfolios in the shakeup.

Hussein Mjalli, a former head of the Jordanian lawyer's association and member of the country's opposition Baath Party, is the new justice minister.

A journalist, Tareq Masarweh, joined the Cabinet as culture minister, while Taher Odwan, the editor of the Jordanian daily newspaper Arab Al Yawm, will take the post of communications minister.

Jordan's Muslim Brotherhood has refused an offer to join the government, arguing that the prime minister should be chosen by parliament instead of the king. But an independent Islamist, Abdul Raheem Ekour, was named the kingdom's Islamic affairs minister.