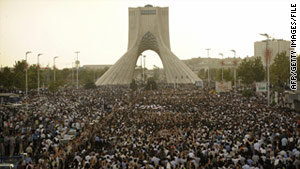 Opposition leaders have asked to hold a rally next week in Tehran's Azadi Square, site of protests after the 2009 vote.
STORY HIGHLIGHTS

Are you in Iran? Show us what's going on and share your thoughts at CNN iReport.

The arrests come days after Iran's two leading opposition figures called for a rally next Monday in support of the uprisings in North Africa and the Middle East.

Iranian authorities on Wednesday warned against any attempt by the opposition movement to hold the rally, according to the state-run Islamic Republic News Agency.

"We definitely see them as enemies of the revolution and spies, and we will confront them with force," Revolutionary Guard Cmdr. Hossein Hamedani told IRNA.

It was unclear whether the government has denied the request.

Those detained, according to the Thursday report on Saham News, include Saleh Noghrekar, the former head of Moussavi's election campaign and the nephew of Karrubi's wife. Agents detained Noghrekar early Thursday and spent four hours searching his home, the website said.

On Wednesday, Iran's top prosecutor dismissed the call for the rally as a ploy by the opposition movement to undermine the regime, according to the semiofficial Iranian Student's News Agency, or ISNA. Gholam Hossein Mohseni-Ejei said that if Iranians want to support the people of Egypt and Tunisia, they will attend the government-sanctioned rally on Friday to commemorate the 32nd anniversary of the Islamic revolution.

Members of Iran's government have expressed strong support for the uprising in Egypt. Supreme Leader Ayatollah Ali Khamenei called it an "Islamic awakening" against a U.S.-backed dictatorship.

"If they are not going to allow their own people to protest, it goes against everything they are saying, and all they are doing to welcome the protests in Egypt is fake," Karrubi told The New York Times on Tuesday.

Moussavi and Karrubi asked that the rally take place in Tehran's Azadi Square, the site of mass protests by Iran's opposition movement after the disputed 2009 presidential elections.

For nearly eight months, supporters of Iran's so-called Green Movement chose major calendar days to protest in cities throughout the country. Many of the movement's grievances were identical to those now being expressed in the streets of Cairo.

Protesters condemned what they called an oppressive regime, demanded political and social freedom and called for a more representative government.

Iran eventually quelled the demonstrations with a brutal crackdown against the peaceful street protests and the arrests of hundreds of activists, reformists and opposition figures, some of whom remain behind bars.

Since the unrest, Iranian authorities have rejected all requests by Iran's opposition movement for peaceful demonstrations.

On Tuesday, Karrubi told The New York Times the protest will be a test for the opposition Green Movement.

"If the government issues a permit, there will be a huge demonstration and it will show how alive the Green Movement is," he said. While public activism took a hit after the crackdown, he said, members of the movement are still working toward rights such as free elections, freedom of assembly and freedom of speech.

In September, Karrubi's website reported a group of attackers entered the opposition leader's apartment building and beat the head of a security team protecting Karrubi. The attackers shot at the building, cut water pipes to the apartment and tried to cut power on the street, the website said.

It identified the attackers as members of the Basij, militia who support Khamenei, and said Karrubi's apartment had been attacked on four consecutive nights.

Karrubi's son, Mohammad Taghi Karrubi, told CNN he was inside the apartment when about 20 Basij broke into the courtyard of the complex and fired shots, set small fires in the courtyard and the lobby and vandalized parts of the building.

"They called the police; nobody came," he said.