Cairo: Finding the city behind the headlines 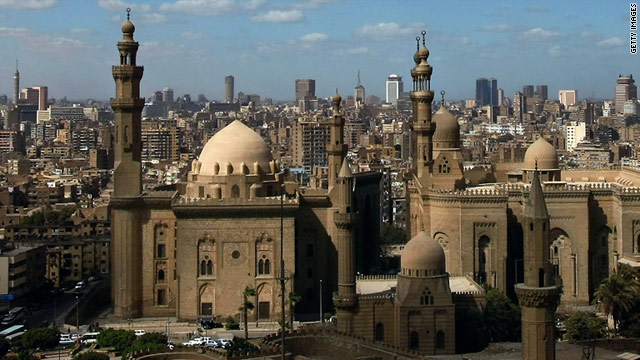 (CNN) -- Cairo is currently the center of the world's attention as the site of historic protests that have already had huge repercussions in the region.

But what is the story of this ancient, mighty city, the most populous in the Arab world? And what is everyday life like for the millions who live there?

Cairo residents complain about pollution, perpetual traffic jams and Cairo's struggle to accommodate an ever-expanding population -- but they are fiercely proud of their city.

Maria Golia, author of "Cairo: City of Sand," has called Cairo home for the last 25 years. Golia has lived in New Jersey, Rome and Paris, among other cities, but says Cairo is the safest place she has ever lived, with the greatest sense of camaraderie and neighborliness.

Built on a thin strip of fertile land around the Nile and surrounded by desert, the city proper is home to some seven million people, with up to 18 million living in the Greater Cairo sprawl.

In a country known for its ancient civilization, Cairo itself is little over 1,000 years old. While the nearby pyramids of Giza evoke the distant past, the city's recent history is more dynamic. In the last 100 years it has been the capital of a British protectorate, an independent kingdom, and the short-lived United Arab Republic.

Consumer culture is flourishing to a certain extent ... but the majority of the population is more interested in what it's having for dinner.
--Maria Golia, author of Cairo: City of Sand

Religion has always been an intrinsic part of life in the place known as "the city of 1,000 minarets." The mosques and religious schools of its Islamic district may date back hundreds of years, but Islam is just as relevant today.

Samia Mehrez is professor of Arabic literature at the American University in Cairo, and has compiled "The Literary Atlas of Cairo." She says religion is part of everyday life in Cairo, but sits comfortably with its role as a modern, cosmopolitan city.

In recent years, efforts to liberalize the country's economy have seen a mushrooming of Western-style consumer culture, said Mehrez.

"In the last 15 years there's been every fast food place you can imagine (in Cairo) -- all sorts of brand names," said Golia, "but only a relatively small part of the population can actually afford to buy it.

"Consumer culture is flourishing to a certain extent, and there is a growing middle class in Egypt that aspires to these kinds of things, but the majority of the population is more interested in what it's having for dinner."

The growing divide between the few Cairenes who have benefited from Egypt's economic growth and the vast majority who have not has been a major factor in the protests sweeping the city.

It has also affected how, and where, Cairo's residents live. In recent years a profusion of luxury gated compounds have appeared in the city, many in the desert suburbs, far from the noise and pollution of downtown.

At the same, a lack of affordable housing means more than half of Greater Cairo's population lives in "informal housing," according to David Sims, housing expert and author of "Understanding Cairo - The Logic of a City Out of Control."

Described as "slums" by some, and overcrowded and lacking amenities though they may be, they are far from shanty towns, said Sims. He adds that they house many of the city's lower middle class, entrepreneurs, and petty traders.

Cairo embraces and envelopes you in its incessant energy.
--Samia Mehrez, American University in Cairo

Technically illegal, the "informal housing" is built on agricultural land that has been divided into plots by farmers and sold to those who cannot afford to live downtown or in state-built housing developments in the desert. Once they own the land, the residents build their own homes when they can afford to.

"It's people solving their own problem," said Sims. "Basically Cairo manages itself -- the state is largely irrelevant."

UN Habitat says three of the 30 largest slums in the world are in Cairo, including the notorious, garbage strewn, Manshiet Nasser, home to up to one million people.

But rather than its buildings, Cairo is perhaps best defined by its residents. Cairenes are resourceful and resilient, always able to make the best of a difficult situation.

"People are kind and always ready for a laugh," said Golia. "They have a constantly evolving joke culture. The jokes are very political -- it's a way of expressing political views freely.

"Egyptians are extremely politically aware. They're very interested in politics in terms of human nature -- what people do for power and what people without power do -- which is learn to get along on their own."

With widespread financial hardship making expensive entertainment a luxury most cannot afford, on long, hot summer evenings Cairenes head downtown, walking along the Nile and socializing on the historic bridges that straddle the river.

"This is where lovers meet and families go for outings and friends congregate, because they don't have to pay, and in doing so they take over some of the most magnificent spots in the city," said Mehrez.

It's these ordinary Cairenes who provide the city with its defining characteristic -- its energy.

"Cairo embraces and envelopes you in its incessant energy," said Mehrez. "You either resent being completely submerged in it, or you resign yourself to it and fall in love with it."