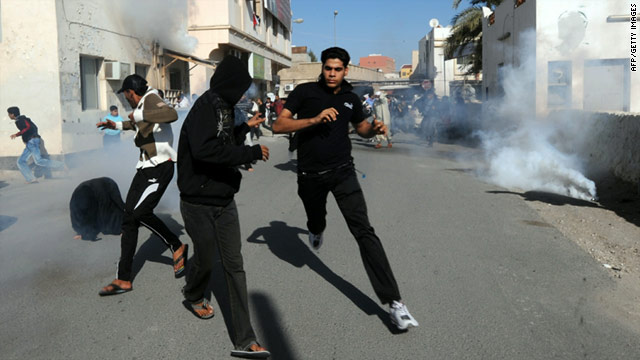 Are you in Bahrain? Show us what's happening, but please make safety your first priority.

(CNN) -- A 27-year-old protester in Bahrain who was shot in the back Monday afternoon has died, the president of a human rights center said Tuesday.

Ali Abdulhadi Mushaima was protesting for human rights in the village of Daih, near Manama, when he was shot, according to Nabeel Rajab, president of the Bahrain Center for Human Rights. Mushaima died Monday evening.

Lt. Gen. Shaikh Rashid bin Abdullah Al Khalifa, the minister of the interior, "offered condolences and deep sympathy to the family of Ali Abdulhadi Mushaima on Monday," according to a statement on the interior ministry's website.

The minister said a probe would be launched into the case to determine the reasons for the use of a weapon. "He affirmed that if the probe revealed no legally tenable reason behind the use of the arm, then legal steps would be taken to refer the person behind the incident to the criminal court," the statement read.

Protesters who have organized on Facebook, Twitter and with e-mails want political reforms, including a constitutional monarchy.

Bahrain hosts the headquarters of the U.S. Navy's Fifth Fleet.