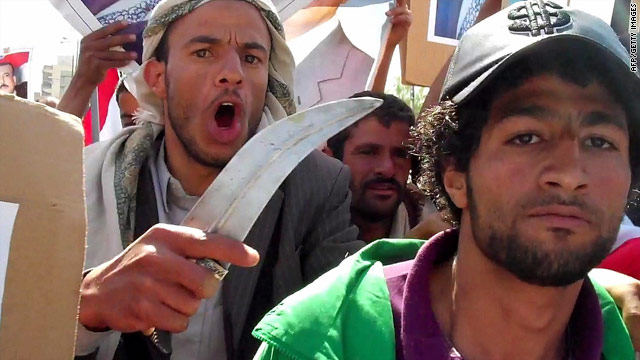 Sanaa, Yemen (CNN) -- One person was killed in an anti-government protest in the Yemeni city of Aden on Wednesday, eyewitnesses reported, while human rights activists accused pro-government demonstrators of beating students after a similar protest in the capital, Sanaa.

Witnesses in Aden said the victim was an 18-year-old who had been shot by security forces trying to disperse the crowd. Video distributed by student activists appeared to show the youth being carried away, bleeding heavily from his left side. But CNN could not independently confirm the authenticity of the video, and there was no immediate confirmation of the fatality from hospital officials.

The Aden protest drew thousands of demonstrators, mostly students, to the city's Al Mansoora district for a sixth straight day. And in Sanaa, students at Sanaa University rallied inside the gates of the campus in a demonstration organized by the head of the university's student union, said Omar Al-Nihmi, a third-year media student at the school.

The three students injured in Sanaa were attacked while on their way home from the university demonstration, human rights activist Abdul Rahman Barman said. Barman said he took one of the students to the hospital with head injuries from being hit with sticks, but the other two had only minor injuries.

The students started out calling for an improved curriculum, for removal of the university dean and for security forces to remain off-campus. But about 90 minutes into the event, the mood turned anti-government, said third-year student Salah Al-Janadi.

More students showed up, both Al-Nihmi and Al-Janadi said, and the protesters began chanting anti-government slogans such as "The people want the fall of the regime" and "Oh Ali, son of Saleh, your regime is no good." They also chanted, "Our protests are peaceful and we don't have weapons."

Al-Janadi said he was told by the protest organizers "that because today's protest was a student union protest at the university, security forces at the scene would not interfere."

Hundreds of police were on the scene as well. They did not interfere with protesters, Al-Janadi said, but fired bullets into the air, successfully dispersing the crowds.

Yemeni President Ali Abdullah Saleh has been in power for 32 years and has pledged not to run for re-election when his current term ends in 2013.

Journalist Hakim Almasmari contributed to this report for CNN.