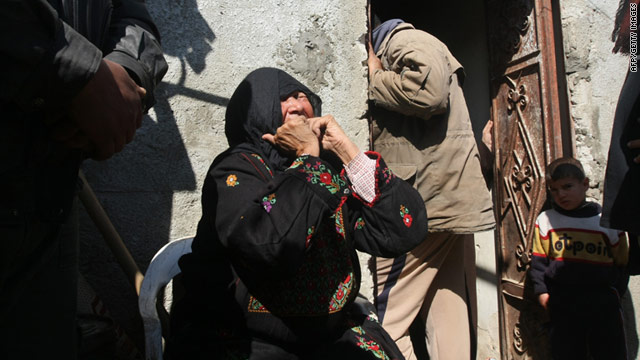 A relative of one of the three Palestinians who were shot dead by Israeli forces cries during his funeral in Gaza.
STORY HIGHLIGHTS
RELATED TOPICS

(CNN) -- The Israeli military fired on militants who were trying to plant a bomb near a security fence in northern Gaza, striking three, the military said.

About 100 "terror-related incidents" happened last year near the security fence in Gaza, the Israeli military said in a statement. Israel blames Hamas, which governs Gaza, the statement said.

"The presence of Palestinian civilians in the area adjacent to the security fence is used by terrorist organizations as cover for their activities, including planting explosive devices, planning terrorist attacks and attempting to kidnap (Israeli) soldiers," the statement said.