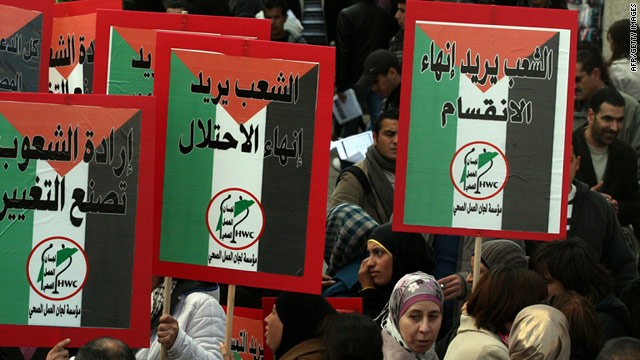 Palestinians protest in Ramallah on Thursday, demanding an end to the split between the Gaza Strip and the West Bank.
STORY HIGHLIGHTS

Ramallah, West Bank (CNN) -- Hundreds of Palestinians rallied for unity in Ramallah Thursday, calling on Hamas, Fatah and other Palestinian political factions to heal the divide among them amid arguments over elections scheduled for September in the Palestinian territories.

"The people want an end to the division," protesters chanted, many of them waving Palestinian flags above their heads, as they gathered in Al-Manara Square in central Ramallah.

Feeding off the revolution in Egypt and Tunisia and sweeping protests throughout the Arab world, many young Palestinians have taken to the streets to increase the pressure on Fatah and Hamas to end the political divide.

"Finally, people are taking a step forward to democracy in Arab countries, people are finally voicing our rights. We are sick of the same old routine of being shut up in our own home and we can't say anything," said Sam, a 16-year-old Palestinian student. "I guess this is our drive, we want our rights and we are going to fight for our rights."

"We all have to stand together. We all have to make our voices heard. This is our chance, right here, right now," said Lutfi Inab, a 16-year-old student from Ramallah.

"Division generates corruption," was one of several slogans written on banners held up by the demonstrators, who flooded the streets after calls went out on social networking sites, schools and university campuses for them to attend.

While calls for political change are growing louder among the Palestinian people, the deep rift between Hamas and Fatah is dimming hopes that the presidential, parliamentary and local elections will be held.

Palestinian Authority President Mahmoud Abbas announced the elections Saturday, and said Thursday that the voting could only be held if all Palestinians in Gaza, Jerusalem and the West Bank could cast their ballots.

But the Hamas movement, which controls Gaza, has vowed to boycott any attempt to walk to the ballot boxes there, saying that Abbas -- whose term in office officially ended in early 2009 -- had no authority to call for the polling.

Presidential elections in the Palestinian territories have not been held since March 2005, while parliamentary elections last took place at the beginning of 2006.

Hamas spokesman Fawzi Barhoum on Saturday called the plan for elections "invalid and illegal," claiming that Palestinian Authority leaders Abbas and Salam Fayyad lacked the legitimacy to make such a move.

He also said that political reconciliation between Palestinians was necessary before elections could be held, and characterized the announcement as a move by the Palestinian Authority to prevent the wave of revolutionary changes taking place in the region from spreading to the Palestinians.

Large-scale protests, as seen elsewhere in the Arab world, have failed to materialize, as many Palestinians believe their problem remains the Israeli occupation.

Palestinian legislator Hanan Ashrawi said Saturday that the Palestinians believe "it's high time" for polls "because we need to re-establish the legitimacy of our institutions through elections."

Ashrawi said the Palestinian Authority is trying to persuade Hamas to participate in elections and believes elections would help the state address its concerns with Israel.

"We are preparing also for statehood and we believe this is an instrument for national unity -- so all these things make it imperative that we do have elections between now and September," she said.

Barghouti told CNN the Palestinians "don't have real governments here. All of these governments are under occupation.

Whether the political parties are listening remains to be seen, but as events in the region illustrate, ignoring those voices can come at a high price.

Popular uprisings recently sparked the overthrow of strongmen in Egypt and Tunisia, a government change in Jordan, and a promise in Algeria to end the emergency rule there. Also, leaders across the Arab world are envisioning reforms to address grassroots economic grievances.