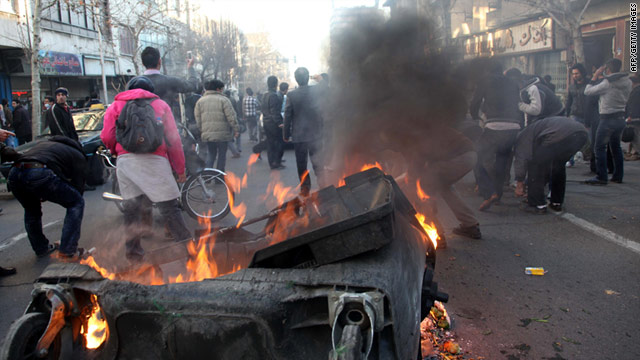 (CNN) -- An Iranian supporter of the country's opposition movement has warned that continued anti-government street protests could lead to civil war.

The woman, a 34-year-old jewelry designer who lives in Tehran, issued the warning in a series of emailed answers to questions put to her by CNN.

The woman doesn't want her real name revealed due to fear of retribution so has asked that we call her Nastaran.

Nastaran: Secularism. [The] separation of religion from politics. As long as religious leaders don't interfere with politics, I don't see a regime change as necessary. However, I doubt that the religious leaders would be willing to accept this.

What kind of real change does the opposition movement hope to accomplish with street protests?

Nastaran: I completely disagree with the continuation of street protests. We are walking towards a civil war by asking people to pour into the streets and fight with empty hands. The regime will not step back and will kill as many people as it deems necessary to stay in power.

Civil war is not the way. We need a change in strategy. I think by not changing the strategy and constantly asking people to get into the streets (especially in the same location) we are empowering Sepah (Iran's Revolutionary Guard) and the Basij (Pro-government militia). It is evident when you go on the streets during the protests that they have learned how to organize and mobilize better. Further, we are helping them to expand their army.

How afraid are you of Iran's security forces and their threats?

Nastaran: Extremely scared!! They are merciless and will do anything in the name of religion. The legal framework of Iran is also being ignored so they can accuse you of anything and perhaps kill you.

Are Mir Hossein Moussavi and Mehdi Karrubi the leaders of Iran's opposition movement?

Nastaran: To me they are not. To me they became leaders through people's anger and dissatisfaction with the regime. However, I believe that every movement and uprising requires a leader and at this point in time there is no one better than them.

The regime will not step back and will kill as many people as it deems necessary to stay in power.
--Nastaran
RELATED TOPICS

I do not accept them as leaders because I generally disagree with their ideologies. Further, I think they are not the right leaders for a large portion of our population. Many Iranians will always believe that these guys are part of the system and will refuse to support them.

Many Iranians will not accept a religious figure, some one with a turban on their head as a leader, given their experience in the past 30 years.

What does Iran's opposition movement want from America right now? What do you want President Obama to do?

Nastaran: Direct interference [from] America is not helpful. Iranians are prone to conspiracy theories and history has proven that American interference is not to our benefit. 28 Mordad is a prime example [the 1953 U.S.-backed coup that overthrew Iran's democratically elected government].

As a result, the masses tend to not want to follow any movement that is initiated or assisted by Americans. Their help should be indirect, but their help can be valuable. An example would be creating infrastructure for Iranians to more freely communicate, have access to information and spread the information.

Additionally, appropriate sanctions can be useful also. However, they should be the type of sanctions that the regime wouldn't be able to blame for the people's unhappiness and poverty. I think [that] until people really feel hungry and see that different economic and foreign policies will mean more comfortable lives, they won't join any kind of a movement. Intelligent sanctions can result in the latter.