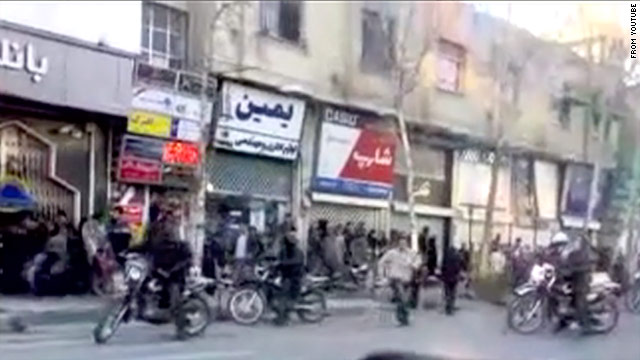 (CNN) -- Thousands of security officers cracked down on landmark sites in Iran's capital and other major cities Sunday, at times striking at throngs of protesters with batons and rushing others on motorcycles, witnesses said.

A few plainclothes security agents stood in the middle of Tehran's Revolution Square, countering anti-government protesters with signs of their own in support of Supreme Leader Ayatollah Khamenei and chanting "I will give my life for the leader," an eyewitness told CNN. Hundreds of other security personnel cheered the group.

Another witness said large crowds chanted "Death to the dictator" at the intersection of Gharib and Enghelab (revolution) avenues. Security forces on foot and motorcycles there beat several protesters with batons and detained at least four, the witness said.

By nightfall, a witness in Tehran said the streets were quiet, with the exception of the occasional buzz of security forces' motorcycles.

Earlier, witnesses reported that security officers doubled up on motorcycles charged a group of 150 people gathered on Vali Asr Avenue, striking at least 15 fleeing protesters with batons as crowds of people grew near Revolution Square.

The daughter of former Iranian President Hashemi Rafsanjani, one of the nation's most powerful clerics and a vocal critic of the government, was briefly detained on Vali Asr for "provocative behavior," Iranian media reported.

Faezeh Hashemi Rafsanjani was chanting anti-government slogans to create "unrest in the streets," the official Islamic Republic News Agency said. The semi-official Fars news agency she was released shortly after her arrest.

Opposition websites reported that security forces opened fire on protesters in Hafteh Tir Square, killing one person. Safari-Ali Baratloo, a security official, denied there were clashes in Tehran on Sunday, much less a death, the semi-official Fars news agency said. He accused the websites of reporting lies.

Iranian security forces put up a steel gate in front of the narrow alley that leads to opposition leader Mir Hossein Moussavi's Tehran home, opposition website Kaleme reported. An employee at a neighborhood hospital confirmed to CNN by phone that a new steel gate now blocks entry to the alley. She said the gate was not there on Friday.

Moussavi and fellow opposition leader Mehdi Karrubi -- both of whom have decried the results of the June 2009 election that declared President Mahmoud Ahmadinejad the overwhelming winner -- have been under house arrest in recent weeks.

Security forces surrounded Moussavi's Tehran home on Saturday, blocking anyone from coming or going, and cut off all phone lines, according to opposition websites. Moussavi's family members say the security forces have told them they're from the prosecutor's office, but have not provided any identification or produced court order for the heightened restrictions, Kaleme reported.

Large numbers of security forces continued to patrol areas throughout Tehran and other parts of the Islamic Republic.

Hundreds of miles south of the capital, protesters in Isfahan were met with batons and pepper spray in one square while hundreds of others were able to march peacefully under the watch of about 200 security agents at another demonstration site, a witness said.

Two protesters in Isfahan were beaten, then taken away in an unmarked car by security agents, the witness said.

An eyewitness in historic Shiraz, who participated in demonstrations Sunday, told CNN that large crowds of anti-government protesters have gathered along Mollasadra Avenue in the center of the city. Roughly 200 people, including men and women of all ages, gathered at the site, but were dispersed by uniformed and plainclothes security agents who hit at protesters with batons.

The witness, an art student who has been involved in protests in Iran since the 2009 fallout over Iran's disputed presidential election, said security officers on motorcycles would aim for the crowd but swerve just before of hitting people. She said she saw at least five people wounded at the scene.

CNN could not independently verify the reports. Reporting from Iran has been difficult this week -- foreign journalists were denied visas, accredited journalists living in the country were restricted from covering the demonstrations and internet speed slowed to a crawl in an apparent attempt to both limit protest organizing and restrict information from being transmitted out of the country.

Earlier, sources told CNN that 11 journalists, cameramen and photographers working for international media had their work permits revoked by Iran's ministry of culture on Friday for covering unrest in the country on February 14.

They include staffers from AFP, Al-Jazeera and The New York Times. New York Times spokeswoman Danielle Rhoades Ha confirmed to CNN that a Times reporter's press credentials were confiscated in Iran. Ha said the newspaper is not identifying the reporter and would not share any more details.

Last week, thousands of government opponents marched in Tehran on Monday. And Wednesday, thousands more took to the streets for the funeral of a man killed in Monday's demonstration.

Iranian authorities began rounding up many government opponents last week amid calls for protests like those that have swept across North Africa and the Middle East.