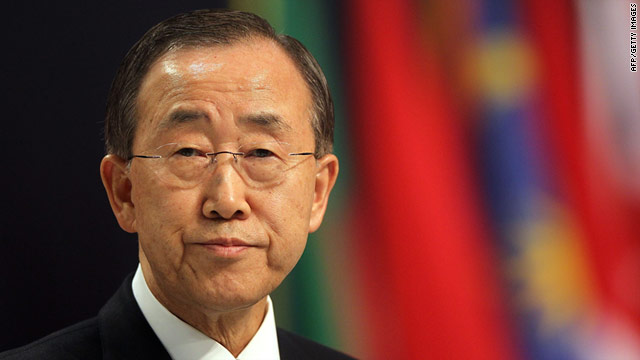 (CNN) -- U.N. Secretary-General Ban Ki-moon has been in "continuous contact" with regional leaders in northern Africa and the Middle East, his office said.

Ban has been deeply concerned by escalating violence and bloodshed during pro-reform demonstrations, according to a statement from his office released Sunday night.

"This is the time for broad-based dialogue and for genuine social and political reform," the office said.

Ban has also spoken with world leaders such as U.S. Secretary of State Hillary Clinton; Secretary-General of the League of Arab States, Amr Moussa; and Catherine Ashton, the representative for foreign affairs and security for the European Union.

But his most extensive contacts have been with leaders in northern Africa and the Middle East, the statement said.

Ban has been encouraging leaders to listen and respond to the desires of their people, and to refrain from violence. He has also advocated for freedom of the media and uninterrupted communication services, according to the news release.

The statement also said that the Secretary-General spoke Sunday with Bahrain's King Hamad bin Isa Al Khalifa. Ban expressed his concern about recent protests and urged the government to both exercise restraint and to try to calm the situation. He also said the United Nations is prepared to support such a process.

Ban has decided to send senior U.N. officials to Egypt, after discussions with the new leadership in the country.

He also plans to discuss reports of violence coming from Libya with current government officials.