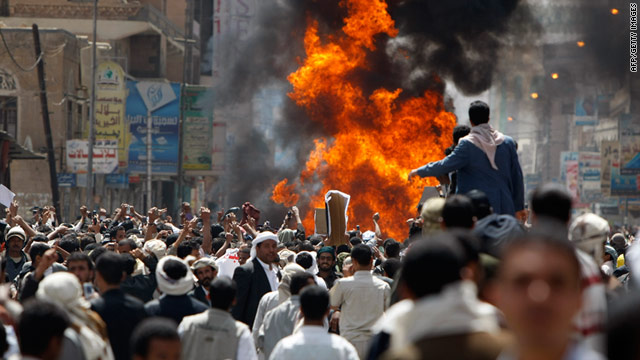 Protesters gather around a burning vehicle belonging to government supporters during a protest in Sanaa on Tuesday.
STORY HIGHLIGHTS
RELATED TOPICS

Tom Finn, an editor at the Yemen Times newspaper, said he arrived at the scene outside Sanaa University just after the shooting happened shortly after 11 p.m.

"I saw young students being carried into the middle of the crowd and being put into the medical tent," Finn told CNN. "I saw two students bleeding from the head and one bleeding the chest. And I saw five ambulances leaving for hospitals."

Reports from witnesses at the scene were that some 20 people were injured, with at least eight anti-government protesters shot and three of them in critical condition at hospitals.

Students have been conducting a sit-in outside Sanaa University -- one of several anti-government protests around the country Tuesday.

Earlier in the day, sit-in participants had overturned a car and set it on fire after discovering weapons inside apparently brought to a demonstration by government loyalists, a protester said.

Demonstrators noticed a parked car near the sit-in and were told that the people in the car were pro-government loyalists who had come to harass them, according to one of the protesters, Adnan al-Nathari.

Several hundred students converged on the car to confront those inside, who then fled, he said. The protesters searched the car and found a rifle and a gun, al-Nathari told CNN. The students then flipped the car and set it ablaze.

There were no injuries reported in that incident.

The government had no immediate comment on the incident.

The sit-in at Sanaa University is one of at least five protests going on Tuesday in Yemen. There were others in Aden and Taiz, and in the provinces of Ibb and Lahj.

On Monday, Yemeni President Ali Abdullah Saleh rejected demands that he step aside, comparing the anti-government protests to an illness sweeping through the region.

Saleh added that those seeking change should accept the reforms he has proposed. He had earlier said he won't seek another term in 2013 after being in power for 32 years. He also said he would postpone parliamentary elections scheduled for April to allow more time for discussions about reform.