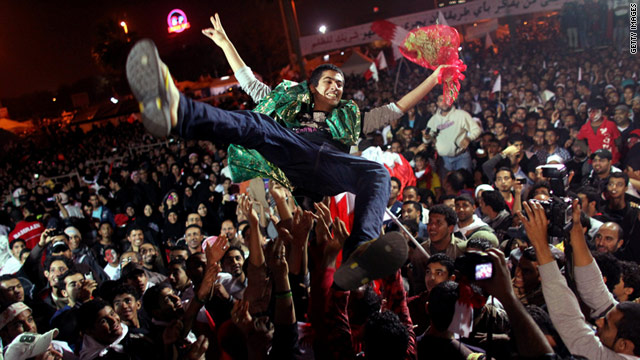 Manama (CNN) -- Large crowds of anti-government demonstrators massed on Wednesday in Manama, Bahrain, buoyed by news of the release of high-profile political detainees.

The release of about 25 detainees followed an order by the king to free them and halt proceedings against others, the Bahrain Center for Human Rights said.

Among those released late Tuesday were the prominent blogger and human rights activist Ali Abdulemam, who runs bahrainonline.org; Abdul-Ghani Khanjar, a member of Committee for the Victims of Torture; and Mohammed Saeed, who works with the Bahrain Center for Human Rights.

In addition, several prominent Shiite clerics were released as was Dr. Abduljalil Al-Sengais, spokesman of the Haq Movement for Civil Liberties and Democracy.

Nabil Rajab of the Bahrain Center for Human Rights told CNN that the releases bring to about 100 the number of political detainees so far released, but he says an estimated 400 people are still detained on politically-inspired charges.

The move to free prisoners comes as protests continued in Bahrain. A crush of protesters covered the streets in Manama on Tuesday, according to Bahraini state television.

King Hamad, meanwhile, flew Wednesday to Saudi Arabia, where its king returned home after three months abroad for medical treatment. It was unclear what was discussed between the two monarchs.

In the capital city of Manama, tens of thousands of people marched Tuesday in the biggest anti-government rally since thepublic disturbances in the island nation erupted last week, and chants of "No Shia, No Sunni, only Bahraini" and "The regime must go" rang through the multitudes tramping across the center of Manama.

The turnout was led by ambulance workers involved in rescuing some of those injured in the assault by security forces last Thursday on the Pearl Roundabout, which has been the epicenter of the Shiite-dominated protest movement.

King Hamad urged people to engage in a "national dialogue" and asked Bahrainis "to engage in this new process" and "move away from polarization," according to a government statement.