Explainer: Tensions between Sunnis and Shiites 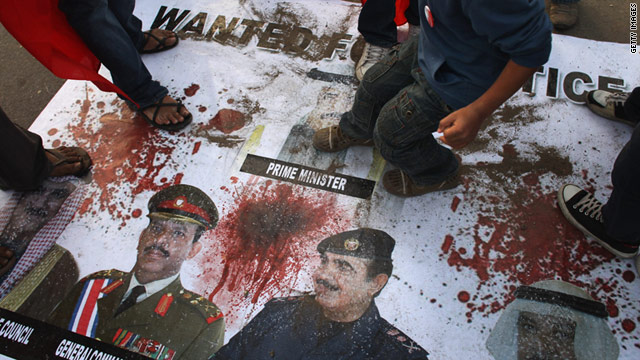 Protesters stomp on a poster of Bahraini government leaders at the Pearl roundabout in Manama on February 21.
STORY HIGHLIGHTS

(CNN) -- As unrest continues to unfold across much of North Africa and the Middle East, fears of growing sectarian tensions between Sunni and Shiites Muslims have risen.

So far the island Gulf state of Bahrain is the only nation to see popular protests divide along religious lines, but are more countries to follow and what does it mean?

What is the difference between Sunni and Shiite Muslims?

Sunni and Shiite Islam are the two major denominations of the Islamic faith.

The majority of Muslims in the Islamic world are Sunnis, with only 10% of the Muslim population being Shiite. In the Middle East only Iran, Iraq and the Gulf island state of Bahrain have populations with a Shiite majority.

What most of the protesters are calling for are not about religious issues. Most are demands for greater economic opportunities.
--Jane Kinninmont from British think tank Chatham House
RELATED TOPICS

Differences between the two groups have developed over the centuries, but the major schism took place in 632AD after the death of the Prophet Mohammed.

Shiite Muslims believed Mohammed's cousin should have been his successor while Sunnis believed there was no rightful successor and one should be elected.

Over time further religious and political differences have developed, but according to Jane Kinninmont, Senior Research Fellow at British think tank Chatham House, the religious differences are not that great, "and the vast majority of Sunni and Shiite Muslims co-exist peacefully."

Why are there tensions between the two groups?

According to Kinninmont, current tensions between the two sects have arisen due to political events in Iran and Iraq -- for example the 1979 Iranian Revolution and the 2003 invasion of Iraq.

The Iranian Revolution saw a new and radically different power in the Middle East -- and the only Shiite one in the region.

"In the early days, Iran had a stated desire to export its Islamic revolution, and its Supreme Leader styled himself as the leader of the whole Muslim world, making Sunni Arab leaders nervous. This had some negative consequences for Shiite Muslims in the region," Kinninmont told CNN.

Kinninmont explained many Middle Eastern states started to suspect their small Shiite populations of disloyalty, fearing they would support Iran. She added that Iran did support some revolutionary groups in other countries at this time.

The growing suspicion between the two sides was compounded by the 2003 invasion of Iraq, which saw a Shiite-dominated government come to power after the toppling of Saddam Hussein's regime.

"This really alarmed the traditional Sunni rulers of the region," said Kinninmont. "There was this mounting fear that Iran and Iraq would work together in collusion against the other Arab states."

Is the unrest in Bahrain simply about religion?

No, says Kinninmont -- protesters in Bahrain are both Shiite and Sunni. "A lot of people in Bahrain feel quite offended by reports that present a simplistic picture of Sunni versus Shiite," she says.

"What most of the protesters are calling for are not about religious issues. Most are demands for greater economic opportunities -- jobs, housing and political rights."

She continued: "Protests stem from a population who feel they are being treated as second class citizens, not because they have different interpretations of the Quran."

Are we seeing sectarian tensions in Bahrain between Sunnis and Shiites?

"Yes. Unfortunately we are," says Kinninmont.

Many Shiites have complained of ingrained discrimination against their community, she said, adding: "Some of these allegations seem to be true, such as Shiite Muslims not being recruited into the army or being excluded from some of the top government jobs."

But, although grievances are not about religion, Kinninmont believes the situation is becoming increasingly polarized, with many people dividing along religious lines.

There is a danger, she says, continued sectarian tensions will make it difficult to come up with a compromise that will end the unrest and allow Bahrain to proceed with democratic reforms.

Are ruling governments in the region exploiting religious tensions to their own ends?

Authoritative governments in the region often use tension between Sunnis and Shiites as a justification to retain power, Kinninmont says.

"They make an argument that the societies are not mature enough for democracy because they're still sectarian or tribal," she says.

According to Kinninmont, former Egyptian President Hosni Mubarak and the king of Jordan have both spoken about the fear of a "Shiite crescent" spreading from Iran and Iraq across to the rest of the Arab region.

"It's about preying on people's fears and pre-conceived notions, asking them to identify as one group or another because of their birth, rather than engaging in a debate," she says.

Are we likely to see more sectarian unrest in the Middle East?

It's not a great factor in any of the countries currently seeing large popular protests, according to Kinninmont. But it could become an issue if protests spread to Saudi Arabia.

"The Shiite minority are seen as quite oppressed in Saudi Arabia, with Shiite religious freedoms not respected," she says.

But says Kinninmont, it's very unusual to see unrest in Saudi Arabia, although its seen protests and unrest in recent weeks on all of its borders.