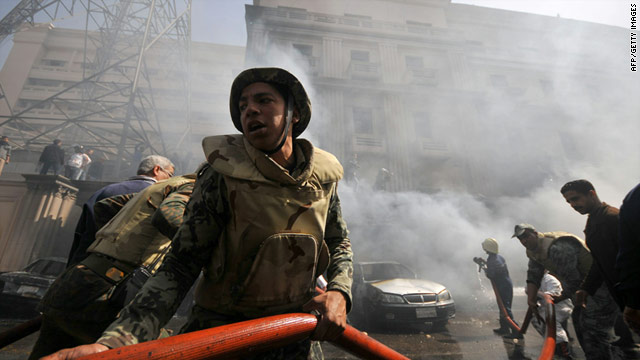 Soldiers help extinguish a fire at a building adjacent to the interior ministry set by former police officers in downtown Cairo.
STORY HIGHLIGHTS

Cairo, Egypt (CNN) -- Smoke billowed into the sky over Egypt's capital Wednesday from a fire at the Interior Ministry compound, a blaze witnesses say was set by protesters upset about labor issues.

Part of a building, surrounding buildings such as the criminal records building, and several cars had been torched. Witnesses said the flames could have been ignited by Molotov cocktails.

Soldiers and police rushed to scene and a couple of men were detained, the witnesses reported.

The compound is three blocks away from Tahrir Square, the epicenter of the sometimes violent clashes that eventually brought down the 30-year regime of President Hosni Mubarak February 11. Skirmishes also took place near where the fire burned Wednesday.

The incident comes as Egyptians continue to work to create the new leadership structure of the country after the revolution.

Where is Mubarak, where is his money?

State-run media reported Wednesday that there have been about 1,300 official complaints lodged against former Egyptian ministers and government officials. Interior Minister Mahmoud Wagdi said he ordered that all of the complaints, many of them about government waste and corruption, be investigated, the state-run EgyNews website reported.

The investigation comes after Attorney General Abdel Meguid Mahmoud requested that the assets of Mubarak and his family be frozen, according to EgyNews website. Along with the former president's assets, those belonging to his wife, Suzanne, were also frozen, along with the assets of the former president's eldest son, Alaa, and younger son, Gamal, and both of the sons' wives, according to the report.

As CNN correspondent Ivan Watson was filming the aftermath of the fire outside the Interior Ministry Wednesday, an Egyptian military officer with two stars on his epaulets grabbed Watson and demanded he turn over his camera.

Saying, "Be quiet, don't talk!" the officer dragged Watson away from bystanders and demanded Watson delete video of the incident. "If you delete the video, I will let you go free," the officer said, identifying himself only as "Mohammed."

Eventually, another officer intervened, and escorted CNN journalists from the scene.

Journalists, especially photographers, routinely have been harassed by Egyptian authorities since protests erupted last month. Cairo-based photographer Roy Mattieu wrote Wednesday on his Twitter account, "I've been arrested three times by the army for my camera & lens, afraid to take them out of the bag now, thought it was improving, not."

Egypt has faced a wave of labor unrest since Mubarak was ousted. Workers at banks, factories, government ministries and at the strategic Suez Canal have gone on strike, demanding better wages and the resignation of executives accused of corruption. Egypt's new military rulers have repeatedly called for an end to the strikes.