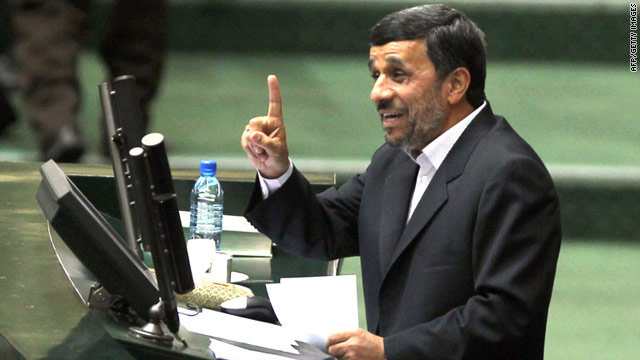 (CNN) -- Iranian President Mahmoud Ahmadinejad Wednesday urged Middle East leaders to listen to the voices of citizens who have taken to the streets in masses to demand a change in government -- though such protests in his own country have been crushed with brute force.

"He further urged those leaders of regional countries who respond to the demands of their nations and their revolutionary uprisings with hot bullets to join their peoples' movements instead of creating blood baths."

Anti-government protests that toppled the regimes in Tunisia and Egypt have spread across a swath of the Middle East and North Africa, including in Iran. There, opposition to the ruling clerics has simmered since the 2009 election, when hundreds of thousands of people filled Tehran's streets to denounce the re-election of Ahmadinejad as fraudulent.

Who is Moammar Gadhafi?

Hope for 'real Libya' after Gadhafi

The demonstrators have been met with force in major Iranian cities. Security forces have opened fire in some cases and arrested hundreds of protesters in others. Opposition leaders are regularly detained and their homes and offices raided.

Hard-line members of the Iranian parliament have demanded the execution of opposition leaders and former presidential candidates Mehdi Karrubi and Mir Hossein Moussavi.

But Ahmadinejad, in his remarks, altogether sidestepped the simmering unrest at home. Instead, he held up Libya, saying the world was "bewildered" by the actions of the President Moammar Gadhafi.

"The president said it was a wonder that the ruler of a country could kill his own people using guns and tanks, and even stress that he would kill anybody who utters a word against him," the news agency said.

Reporting from Iran has been difficult in recent weeks -- foreign journalists were denied visas, accredited journalists living in the country were restricted from covering the demonstrations and internet speed slowed to a crawl in an apparent attempt to both limit protest organizing and restrict information from being transmitted out of the country.