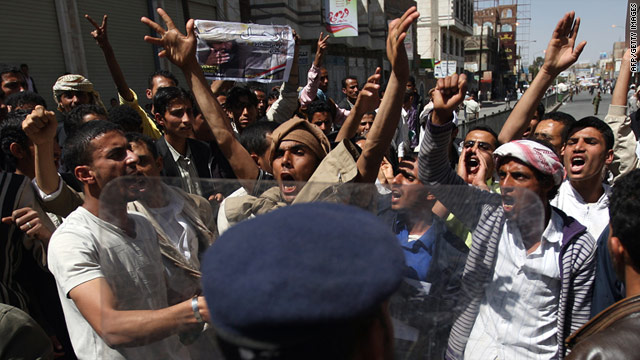 A Yemeni soldier stands guard in front of anti-government protesters during a demonstration in Sanaa on Wednesday.
STORY HIGHLIGHTS
RELATED TOPICS

Sanaa, Yemen (CNN) -- Eight lawmakers from Yemen's ruling party, General People's Congress, have resigned in part to protest the violence that anti-government demonstrators have faced as they call for President Ali Abdullah Saleh to step down.

The parliamentarians submitted their resignations Wednesday.

"I resigned because there's been no respect by the government for human rights, because of the attacks against protesters and journalists, because the security forces are not doing their jobs," said lawmaker Abdu Bishr.

A second lawmaker echoed those sentiments.

"It's their right to protest, according to the law here," Abdulaziz Jubari said.

But there were other factors, Jubari added.

"Corrupt government officials were not taken to court. There's been no progress on continuing a dialogue between the ruling party and the opposition in order to solve the country's crisis," he said.

The resignations come as thousands continued to protest Thursday in Yemeni cities like Sanaa, Taiz City and those in Hodeidah and Ibb provinces.

The government said it has formed a committee to investigate one of the deaths, the Yemen News Agency reported. And Saleh ordered security forces to prevent clashes between demonstrators both for and against the government, and urged both sides to prevent "saboteurs" from entering their ranks, the agency reported.

Protesters have called for the ouster of Saleh, who has ruled Yemen since 1978. The country has been wracked by a Shiite Muslim uprising, a U.S.-aided crackdown on al Qaeda operatives and a looming shortage of water. High unemployment has fueled much of the anger among a growing young population steeped in poverty.

Saleh has promised not to run for president in the next round of elections, and said he supports the creation of a national unity government to oversee upcoming parliamentary elections.

Meanwhile, one person was killed and one more injured when a bomb exploded during a southern separatist protest march Thursday, witnesses and a a senior Abyan official said.

The march was in Lawdar town in Abyan province.