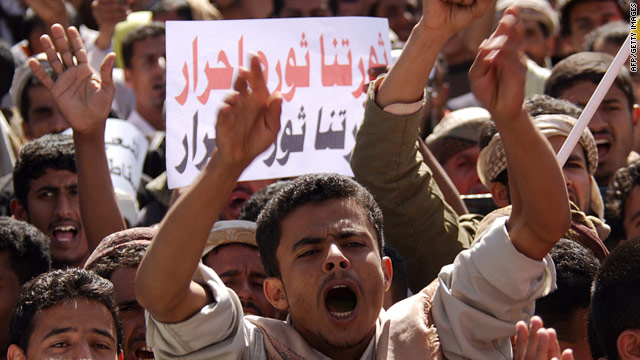 Anti-government throngs also hit the streets in Aden in southern Yemen, according to eyewitnesses. Eyewitnesses reported that security forces tried to disperse the crowd with tear gas and attacked using batons -- an account authorities disputed.

The eyewitnesses said 11 demonstrators in Aden were wounded while one died of gunshot wounds. Authorities insisted no one had been killed.

Protests also were reported in the cities of Taiz and Ibb.

The protest in Sanaa, the capital, was countered by a pro-government demonstration on Tahrir Square, where thousands waved flags and held up pictures of President Ali Abdullah Saleh.

We are joining the youth to be among them and not to lead them.
--Opposition party leader
RELATED TOPICS

"We are gathering in support of President Saleh's initiative and to show the international community that we are with Saleh and that the opposition does not control the streets," Interior Ministry spokesman Mohammed Maueri said before the demonstration.

Anti-government protesters said they were looking for the regime to end.

"This protest and all the following protests are for the fall of the regime," said Noman Saleem, an anti-government demonstrator. "We will not slow down until it falls. Whether it takes place today or tomorrow, we are patient, and we will wait."

Hasam Zaid, general-secretary for the opposition Haq party, said the Sanaa University gathering is a "people's protest" that isn't being coordinated by any particular political party.

"We are joining the youth to be among them and not to lead them," he said.

Saleh has ruled Yemen since 1978. The country has been wracked by a Shiite Muslim uprising, a U.S.-aided crackdown on al Qaeda operatives and a looming shortage of water. High unemployment has fueled much of the anger among a growing young population steeped in poverty.

Saleh has promised not to run for president in the next round of elections, and he has said he supports the creation of a national unity government to oversee upcoming parliamentary elections.