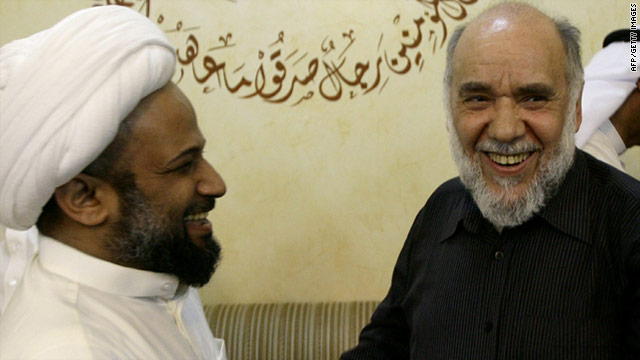 Manama, Bahrain (CNN) -- Bahrain's king reshuffled his cabinet Saturday as protesters continued to call for reforms and a key opposition leader returned to the country.

King Hamad replaced the ministers of housing, health, and cabinet affairs. He expanded the portfolio of the oil and gas minister to include electricity and water, and he appointed a new minister of labor.

The king also announced that all government housing loans will be reduced by 25%.

Saturday's announcement came after opposition leader Hassan Mushaimaa said he had returned to the islands nation, where he planned to join the tens of thousands of protesters camped out at the Pearl Roundabout in the heart of the capital.

Mushaimaa, the leader of the Haq Movement, a major Shiite group, had planned to return earlier in the week to give a speech on the importance of national unity. His return was delayed by his detention in Lebanon, which he blamed on Bahrain's rulers.

Mushaimaa said after arriving in Bahrain that he was preparing a speech about the protesters' demands for a new regime.

Thousands of people have been demonstrating in Bahrain in recent days for political reforms and other concessions. Mushaimaa had earlier said he planned to join them.

The anti-government rallies in Bahrain have occurred alongside similar protests in other regional states, but they have also unfolded amid major gestures by the kingdom.

King Hamad on Tuesday touted a "national dialogue" and urged Bahrainis "to engage in this new process" and "move away from polarization."

"They are always lying -- they are promising to do something and they don't do it," he said about the monarchy.

"We talked about dialogue for a long time. Nobody listened, nobody heard us," he said. "They are just listening now because of the pressure. If the pressure will finish, they will not listen again."

Mushaimaa, who has been living abroad, had previously been detained by the government for campaigning for more democratic rights in the island monarchy.

In September, Bahrain said it requested Interpol -- the world's largest international police organization -- to help in arresting Mushaimaa, whom the government accused of a terrorist plot to destroy state buildings and of planning a coup.

Monday, King Hamad ordered the release of a number of prisoners and closed cases against several Shiite leaders accused of plotting against the kingdom. That cleared the way for Mushaimaa to return to Bahrain from London, where he had been living in exile.

Mushaimaa's Haq Movement is more hard-line than the opposition Wefaq party, which includes 18 people in the 40-member parliament. Many members of his movement are opposed to the government monarchy.