No decision yet on Egyptian presidential run, Moussa says 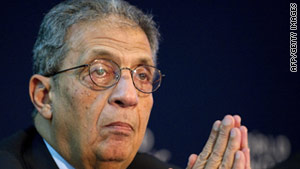 (CNN) -- Arab League chief Amre Moussa told CNN Sunday that he has not decided whether he will run for the Egyptian presidency, denying a report in Egyptian state media.

A high profile Egyptian, Moussa had joined demonstrators in calling for former President Hosni Mubarak's ouster, but has not said whether he would run to succeed him.

After Mubarak fell, Moussa said that Egyptians are "looking forward to a different future" and hoping for "a better future."

Moussa has said he would like to see free and fair elections held in the next six to seven months, and that Egypt needs to have a "modern constitution" that promises tolerance in light of what he called a "renewed, positive relationship (across) all sections of Egyptian society."