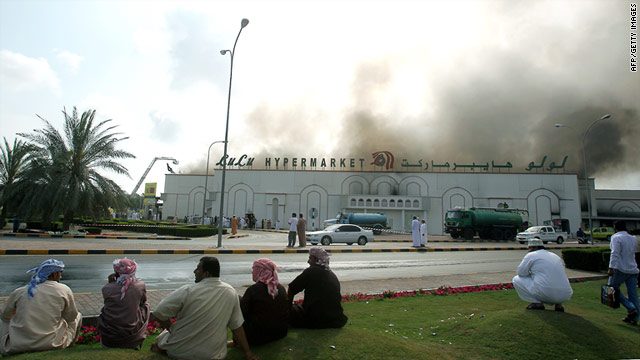 Omani protesters continue to call for more jobs as a hypermarket burns during a demonstration in the town of Sohar. Some believe police killed two protesters for burning shops and cars in the town.
STORY HIGHLIGHTS
RELATED TOPICS

"The police shot them because they burned shops and cars in Sohar," Rshid said. Another source said it was rubber bullets that the police fired. A number of police had also reportedly been injured, but numbers were not confirmed.

There were about 1,000 protesters in Sohar, calling for more jobs.

The demonstration started peacefully before a couple of groups split off and started attacking a supermarket and a police station, and members from the Shura Council, al Rashdi said.

One of the targeted buildings was the Walli House, where the governor who represents the sultan in Sohar lives, a witness told CNN.

CNN's Caroline Faraj and Victoria Brown contributed to this report.